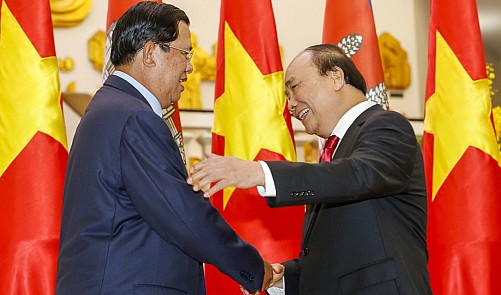 Cambodian Prime Minister Hun Sen began his two-day visit to Vietnam on Tuesday with meetings with Vietnamese leaders, where both sides looked to cement bilateral relations between the two countries.

Such issues as economic cooperation, trade, investment, education, mutual border and expatriate communities were high on agenda during Tuesday’s meetings in Hanoi between the visiting premier and his host, Vietnamese Prime Minister Nguyen Xuan Phuc.

The two premiers expressed wishes to cement and develop bilateral ties in the spirit of “good neighborliness, traditional friendship and long-lasting multifaceted cooperation”.  Phuc expressed his wish that the two countries would work more closely, respect the other’s legitimate interests, jointly settle current issues, maintain an environment of peace and stability, and strengthen friendship between the two peoples. Both sides agreed to facilitate future government visits while working closely together to effectively implement sanctioned agreements. The leaders pledged to thoroughly prepare for the 50th anniversary of bilateral diplomatic ties to be co-organized by the two foreign ministries next June with hopes to improve mutual understanding between the two peoples, especially among younger generations. The two also agreed to promptly convene the 15th meeting of the Vietnam-Cambodia Intergovernmental Committee next year.

On economic, trade and investment ties, the Cambodian Ministry of Commerce and the Vietnamese Ministry of Industry and Trade will soon conduct negotiations for the signing of the Vietnam-Cambodia border trade agreement.

The host suggested further stepping up transport and electricity connectivity, tourism, telecommunication and banking within the framework of a master plan on connecting the economies of Cambodia, Laos and Vietnam.

Host and guest were committed to upholding the principle of not allowing any hostile forces to use one’s territory for the sabotage of the other’s security, as well as to jointly fight smuggling, illegal migration, drug crimes, human and weapon trafficking, and trans-national and cyber crimes. PM Phuc expressed his gratitude towards the Cambodian government for partnering with Vietnam in the search and repatriation of Vietnamese soldiers who died in Cambodia during the war.

As regards border issues, a joint committee was tasked with completing land border demarcation with fair, appropriate and acceptable measures and settle emerging issues along the mutual border in a friendly manner.

Regional and global issues of shared concern were also discussed by the two leaders.

On the occasion, PM Phuc accepted PM Hun Sen’s invitation to visit Cambodia next year.  Following the talks, the two PMs witnessed the signing of an agreement on judicial assistance in criminal matters between the two governments; an agreement on the transfer of sentenced persons between the two countries; and another one between Vietnam’s Committee for Ethnic Minority Affairs and the Cambodian Ministry of Cults and Religion.