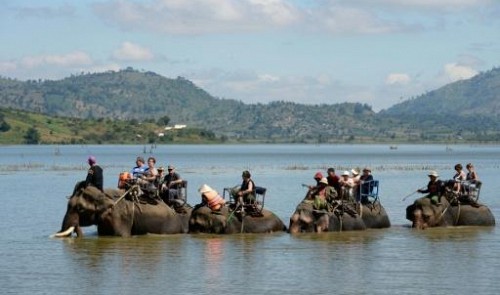 Baby elephant Gold has come a long way since he was found trapped in a well in central Vietnam earlier this year.

Today, the one-year-old jumbo, whose tufts of jet black hair sprout in a mohican from his wrinkly head, frolics around a grassy enclosure where conservationists are trying to save his species.

Gold and his new playmate Jun, another rescue, are among only a handful of young Asian elephants in Vietnam, where low birth rates have see the population dwindle.

Conservationists are hoping to nurse the pair back to health and set up a full-scale breeding centre modelled after successful matchmaking programmes in neighbouring Thailand and Myanmar.

"At the rate they're going now, within a generation or so we'll probably lose the elephants," said Tuan Bendixsen, director of Animals Asia in Vietnam, which helps to care for the elephants.

"As the number gets smaller and smaller, it's going to be harder and harder for the elephants to hang on."

Elephants used to roam freely in the area, mingling with potential mates, but human settlements have cut off once-popular breeding circuits.

Now there are fewer than 100 elephants left in the wild and just 80 or so in captivity, mostly used to ferry tourists around the leafy forests of Vietnam's central highlands.

When it comes to mating, those in captivity are not faring much better.

They rarely get the chance to meet a partner since they spend most of the day chained up. Many are also malnourished and overworked, making it difficult to get pregnant.

"The elephants that are here should be kept under the best conditions... not keeping them for rides," he added.

But convincing local mahouts to hand over elephants to breed or be pulled from work while pregnant won't be easy. They can earn about $13 a day ferrying tourists around, more than double the average salary in the country.

For many it means losing their sole source of income and the status that comes with owning an elephant -- a symbol of prestige in a country where the animals were historically paraded in royal courts and ridden by fighters heading to battle.

"The elephant here is a big asset, but more important, it's a spiritual animal for us," said elephant owner Y Vinh who is from the M'nong ethnic minority.