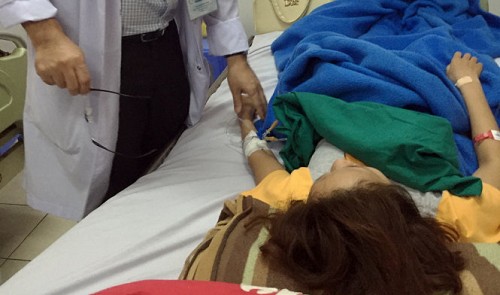 A 22-year-old woman in Ho Chi Minh City has suffered a stroke after undergoing a plastic surgery to beautify her nose, doctors said on Tuesday.

N.T.L. was hospitalized with her left eye losing sight and her limbs too weak to move, according to doctor Nguyen Huy Thang, head of the cerebrovascular disease department at the Nhan Dan (People) 115 hospital.

Upon recovery, L. said she had been injected with a filler during a nose job at a beauty salon in District 6, where she had been undertaking a makeup course.

After finishing the course, L. asked the trainer to give her a nose reshaping surgery, she said.

Injectable filler is a soft tissue filler injected into the skin to help create a smoother appearance.

Shortly after getting the injection, L. was unable to see with her left eye and could not move her right hand or leg, she recalled.

The woman was rushed straight to the hospital from the beauty salon.

Dr. Thang said the filler might have been injected into the patient’s blood vessels, leading to a cerebral embolism, or a blockage of blood-flow to the brain.

The doctor added that the U.S. Food and Drug Administration warns people of these two consequences when using filler in nose surgery.

The patient is still receiving treatment at the Nhan Dan 115 hospital.