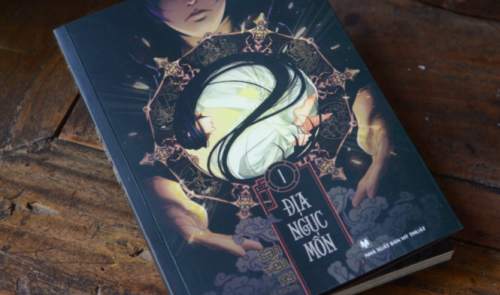 A Vietnamese comic artist was the winner of the silver prize for the second consecutive time at the Tenth Japan International Manga Awards, a foreign ministry-backed drive to honor artists who contribute to promoting Japan’s comic culture overseas.

Ho Chi Minh City-based artist Can Tieu Hy won the silver award for her Gateway to Underworld work, the Japanese Ministry of Foreign Affairs announced in a press release on Tuesday.

Gateway to Underworld tells the story of a girl who is suddenly taken to the underworld and embarks on a search for the reason behind her death, and a way back to life.

Throughout her journey, she learns about life values and the importance of appreciating the relationships and bonds she held in the land of the living.

This year, 296 entries from 55 countries and regions were submitted to the competition, a fantastic showing for the award’s tenth anniversary, according to the announcement.

Fourteen winners, including one Gold Award and three Silver Award winners, were chosen by a jury led by famed manga artist Machiko Satonaka.

The competition’s top prize went to French duo, Joël Parnotte and Xavier Dorison, with their joint work, The Master of Arms.

This is the second consecutive silver prize awarded to a Vietnamese artist in the competition, the first being for the Long Than Tuong (Marshal Long) series, a fictionalized historical comic by the Phong Duong Comics group, honored with the award in last year’s ninth edition of the event.

Hy, born Phan Cao Ha My, graduated from the Ho Chi Minh City University of Architecture and is now a popular comic author in Vietnam known for manga, a special comic style created by the Japanese in the late 19th century.

She will travel to Tokyo to attend the awards ceremony on February 7.

The International Manga Award was founded by the Japanese Ministry of Foreign Affairs in 2007 in an effort to expand international exchange and mutual understanding through the manga culture, an art widely accepted around the world.

This award honors artists for their contributions to the development of manga throughout the world.

The site is Trang An, an area of majestic scenic beauty, steeped in history and prehistory