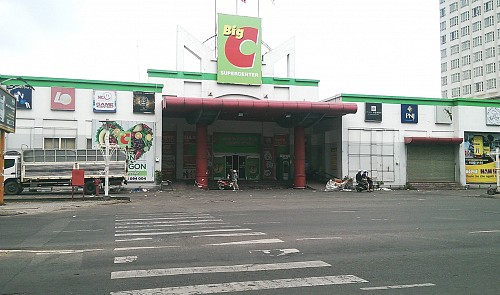 Big C Vietnam has shut down one of its first-ever outlets in the country for an upgrade that its operator claimed will turn the supermarket into a larger and more modern shopping venue once completed.

People shopping at the Big C outlet on Hoang Van Thu Street in Phu Nhuan District, Ho Chi Minh City on January 27 were unaware that it was the last opening day of the venue.

Shoppers were stunned to see employees busy removing and clearing merchandise across the venue, whereas power was cut off at the self-service section. Some attendants said the supermarket would be closed to return the premises to the owner.

On Tuesday, a Big C Vietnam representative confirmed to Tuoi Tre (Youth) newspaper that the Hoang Van Thu outlet was closed for an upgrade that would last for two years.

In Vietnam, Big C normally forms joint ventures with entities that own premises to open new outlets at the latter’s properties.

The owner of the Hoang Van Thu premises will give the existing facility a facelift during the two-year upgrade, according to the Big C Vietnam representative.

“Once construction of the new facility is completed, [Big C] will return as a larger and more modern supermarket,” the company head of public relations, Ho Quoc Nguyen, told Tuoi Tre.

Nguyen asserted that the shutdown was well planned in advance, adding that loyal membership created at the Hoang Van Thu outlet is stored and remains valid throughout the Big C Vietnam chain.

Big C is slated to open a new outlet in Ho Chi Minh City this year, according to the company representative.

Big C Vietnam was initially owned by French retailer Casino, who decided to seek a buyer for the Vietnamese business in December 2015.

In April 2016, Thailand’s Central Group announced they had finalized deals to take over Big C Vietnam from Casino for about US$1.05 billion.

The Hoang Van Thu store was opened in 2008 as one of the very first outlets of Big C in Vietnam.

The chain currently has 32 supermarkets and ten conventional stores countrywide.