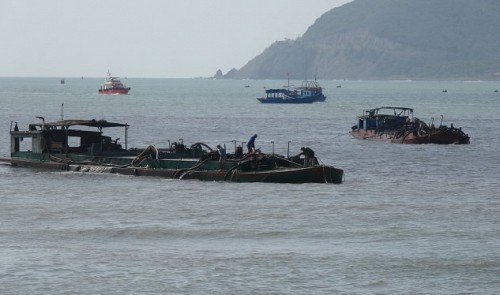 Many Vietnamese businesses have taken advantage of a rule allowing them to export saline sand to reap profits, leaving the environmental impacts caused by the resource’s overexploitation to be dealt with by local residents.

According to a 2013 law, businesses tasked with conducting dredging projects in local sea areas or rivers are allowed to export saline sand dredged during the project in order to recoup their investment.

Many companies were able to obtain licenses for the dredging projects, even if they never carried out any work. Instead, these companies would ‘sell’ the projects to other companies, who accordingly enjoyed the rights to export the saline sand and rake in big profits.

In 2014, Hanoi-based Green Environment Development Co. was assigned to implement a dredging project in Cam Ranh City in the south-central province of Khanh Hoa.

However, on October 1 of that year, the company closed a contract to transfer the project to Hai Duong KG, based in the southern province of Kien Giang.

Hai Duong KG would pay the Hanoi company VND31.5 billion (US$1.41 million) to conduct the project and receive 1 million cubic meters of saline sand after the dredging work was completed, which the firm was allowed to export.

Similarly, also in October 2014, the Khanh Hoa administration granted the Saigon-Hanoi ICMM., JSC the permission to export 2.8 million cubic meters of saline sand from a dredging project on the local Tac River.

Saigon-Hanoi Co. also sold 1 million m3 of the sand to Hai Duong KG at VND31,500 per m3, and later signed contracts to export another 1 million m3 to Singapore’s TNS Resources.

In January 2015, Hai Duong KG also purchased another dredging project, accompanied by the right to export 1 million cubic meters of sand, from Hai Viet Co., located in the northern province of Nam Dinh.

The Kien Giang company paid Hai Viet VND21,000 per m3 to obtain the right to export the sand.

Even though Hai Duong KG has bought saline sand from three different projects at prices ranging from VND21,000 ($0.94) to VND31,500 ($1.41), the company only declared to customs that the resource was exported at much lower prices.

So why are businesses willing to acquire dredging projects only to export the dredged sand at a loss? It appears that this is their way to avoid taxes, particularly the 30 percent export duty.

By declaring the export price at only $1 per m3, Hai Duong KG was forced to pay an export duty of only VND6,690 per m3, significantly lower than the VND26,760 per m3 that would charged under the real contract price of $4 per m3.

Residents suffer it all

In mid-February 2017, Tuoi Tre returned to Dai Lam Commune, Van Ninh District in Khanh Hoa, where a dredging project was being implemented on the local Van Phong bay in August 2015.

The project contractor, Phuc Son Group, was permitted to export 7 million cubic meters of saline sand from the project by June 2017, according to a license granted by the Ministry of Construction.

However, the dredging project was put at a standstill last year due to strong objection from local residents, who catch lobsters in the bay to earn a living.

“The dredging work has affected the bay’s waters and either killed or scared away the lobsters,” Le Minh Thuong, a local, explained.

“Since the dredging project began, not only myself but all other residents have suffered from the profit losses,” he said.

Elsewhere, in the neighborhood next to Tac River, adjacent to the sea in the coastal city of Nha Trang in Khanh Hoa, another dredging project is also taking its toll on local residents.

“I have invested VND40 million [$1,786] on a babylonia areolata farm using the river water, but the dredging activities have polluted the water and killed my snails,” Nguyen Ngoc Tu, a local resident, told Tuoi Tre in mid-February.

The dredging project has also driven a number of lobster cage farms near the river mouth away, another resident revealed.

In the meantime, people in four coastal areas in Phu Yen Province are living under constant fear that the dredging projects will send their houses collapsing into the river due to erosion.