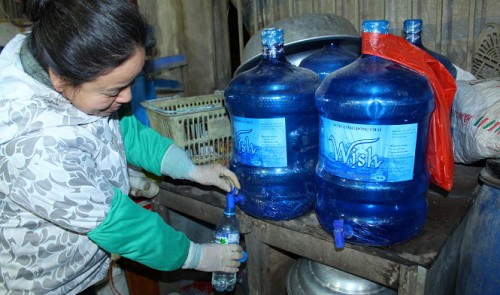 In Vietnam, ‘clean-skin’ alcohol as easy to buy as candy

A mass poisoning involving methanol-tainted alcohol in Hanoi last week has raised fresh alarms on the overlooked market where ‘clean-skin’ alcohol – the alcoholic beverages with no label, no manufacturing information and no nutritional facts – is widely available at dirt cheap prices.

Seven college students, including two women, started to develop symptoms of poisoning on the morning of March 9, after throwing a party the night before with 1.5 liters of unlabeled alcohol.

All were rushed to hospital and are still receiving treatment, with Hanoi police announcing on Sunday that they had launched an investigation into the sale of poor-quality alcohol in the Vietnamese capital.

According to the municipal health department, two Hanoi residents died of methanol poisoning, while 24 others were hospitalized between February 22 and March 11.

It is not difficult to find and buy ‘clean-skin’ alcohol in Hanoi. It is always readily available at eateries, sidewalk cafés, pho shops and groceries across the capital.

At one rice eatery on Thanh Liet Street, Thanh Tri District, a kind of white alcohol is on sale for VND30,000 ($1.34) a liter, with the owner claiming the product to be “good homemade alcohol” from a rural area in the nearby province of Nam Dinh.

The unlabeled bottles of alcohol are placed so drinkers cannot know anything about the liquid they are about to drink.

Sellers of the products insist that these are homemade drinks and do not have information such as the manufacturer’s name or volume of alcohol.

On Sunday, Hanoi police said they had tracked the manufacturers of two types of alcohol blamed for some of the recent methanol poisonings; one in the outer district of Dan Phuong and one in Thanh Oai District.

As of March 11, the Hanoi health department had inspected 833 alcohol makers and sellers, slapping civil fines on 75 of those facilities, destroying 120 liters and confiscating 6,500 liters of substandard drinks.

Three out of 35 alcohol samples tested in the department’s lab were found to have excessive methanol content.