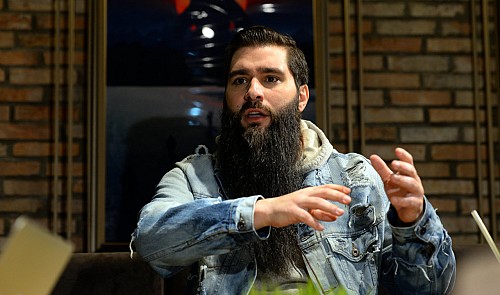 As Hollywood blockbuster ‘Kong: Skull Island’ dominates Vietnam’s box office on its opening day, its director, U.S. filmmaker Jordan Vogt-Roberts, has a plan in mind to resettle in Ho Chi Minh City, where he will be working on a personal film project.

Despite an imperfect premiere ceremony where fire engulfed a giant foam model of King Kong outside a Ho Chi Minh City mall, ‘Kong: Skull Island’ grossed over VND18.2 billion (US$812,500) in Vietnam on Friday, the highest-ever opening day revenue in the country’s box office history.

An estimated 162,000 moviegoers hit the cinema on the day to watch the movie, the first Hollywood blockbuster to be filmed mainly in Vietnam, according to CGV, the film’s distributor in the Southeast Asian country.

Kong’s director Jordan Vogt-Roberts landed in Ho Chi Minh City on Saturday morning to attend a series of promotional events, which included a press briefing, a movie screening joined by Vietnamese celebrities, and a dinner with special partners at the Times Square tower in District 1.

During his time in the southern Vietnamese metropolis, the U.S. filmmaker afforded Tuoi Tre (Youth) newspaper an interview where he shared his experiences working on the most ambitious film project of his career to date, as well as his personal plans for the future.

Vogt-Roberts admitted to having faced tremendous pressure while working on the $180 million blockbuster, as his previous independent projects only had an average budget of around $2 million.

The director said all he could do was try to make a film that everyone could enjoy, in response to reviews by moviegoers who said his film failed to live up to their expectations and lacked the emotional depth of Peter Jackson’s 2005 masterpiece ‘King Kong.’

Having visited locations in Hawaii, Australia and Thailand for the setting of ‘Kong: Skull Island,’ the director opted for Vietnam the moment he saw the breathtaking landscapes of the country’s northern region.

Vogt-Roberts recalled having found himself overwhelmed by the beauty of the views, landscapes, colors and shapes of the Vietnamese provinces of Ninh Binh, Quang Ninh and Quang Binh that he and the crew had never seen before.

It was at that moment that he knew no other place would be a more suitable home for Kong, the magnificent king of all monsters.

The director was intrigued by the idea of shooting the film at a location where no other Hollywood film crew had set foot on before, and which would certainly leave international viewers in awe, wondering where on Earth those beautiful landscapes could be.

"I honestly don't think the rest of the world truly knows how beautiful this country is and how amazing the people are and how incredible the food is," he said.

He had tasked himself with showing the world how beautiful Vietnam really is, even before a unanimous vote by members of the Vietnam National Administration of Tourism (VNAT) nominated the Kong director to become the country’s next tourism ambassador in the 2017-20 tenure.

All 13 members of the VNAT council backed Vogt-Roberts’ nomination during a voting session on Thursday, an offer the U.S. director delightedly welcomed.

He said no words could describe how proud and humbled he was to receive the honor, or how passionately he was in love with the Southeast Asian country.

He believed that Vietnam would soon be a destination favored by international tourists after the success of the film, just as how Thailand and Cambodia have been following other Hollywood blockbusters, and that his mission was to promote Vietnam through the box office.

The director said he had already thought of selling his residence in Los Angeles to buy a house in Ho Chi Minh City, where he would be working on a personal film project with the participation of Vietnamese and international actors and actresses.

He said he would be working with not only those in the film industry but also artists in other domains, as they are a great source of inspiration full of energy and potential.