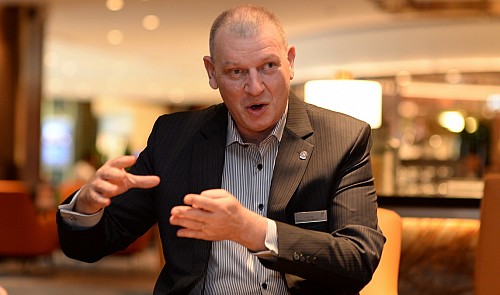 Scott Hodgetts, general manager at Sheraton Saigon Hotels and Towers, has said that the willingness of Ho Chi Minh City leaders to change, listen to the people and engage in discussions is a guarantee of the city’s continued growth in the future.

The Australian manager was among several foreign business leaders invited to join a meeting in the southern metropolis on Wednesday to discuss and review a Party Resolution on transforming Vietnam’s tourist industry into a key economic sector.

His initial surprise soon turned into understanding as he realized the meeting was clear evidence of city leaders' commitment to listen to feedback from business leaders on how to promote tourism.

It was fitting that Hodgetts was invited to speak at Wednesday’s meeting, as he understands as well as anyone how the city can improve to better facilitate businesses, especially those concerned with tourism.

The five-star hotel where he works, Sheraton Saigon in District 1, Ho Chi Minh City, was subject to at least 13 inspections by different authorities in 2016 alone, which he said posed a challenge for hotel managers to prepare the required reports and papers.

In his remarks at the meeting with city leaders, Hodgetts suggested that the problem does not lie in the frequency of inspections by Vietnamese authorities, but rather in the transparency of the manner in which relevant regulations are enforced.

He added that better mechanisms are needed to enable businesses to fully comprehend local laws and regulations so as to prevent themselves from violating them.

As a businessman, Hodgetts said, it is his job to pay close attention to the legal system of where his business is based, and to strike a balance between law and business.

The Australian manager commented that all countries have their own problems to be resolved, but the positive thing is that constructive feedback and comments were being listened to by leaders of Ho Chi Minh City, as demonstrated in the invitation of foreign business owners to attend a strictly political meeting on Wednesday.

Scott Hodgetts first came to Vietnam in 2002, and has since worked in various positions within branches of the U.S.-based Sheraton hotel chain in Ho Chi Minh City and Nha Trang.

Hodgetts has a family of his own in the Southeast Asian country, and his dedication to the city has therefore grown beyond business terms to develop into a passionate love for the place he now calls home.