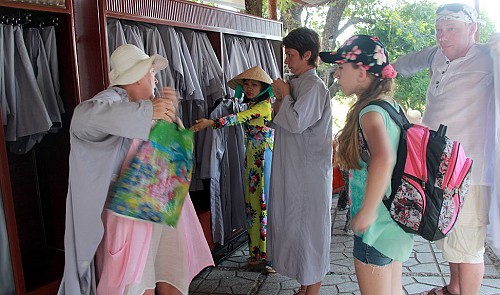 Overcoats made available for inappropriately dressed tourists in Nha Trang

Tourists dressed in shorts or sleeveless shirts can now borrow overcoats at popular tourist site Ponagar Cham Towers, an ancient place of worship in the south-central city of Nha Trang.

Situated on a knoll at the mouth of the Cai River, two kilometers north of Nha Trang, Ponagar Cham Towers is dedicated to the worship of Lady Po Nagar, widely believed to be the originator of the Cham people in southern Vietnam.

Every year, hundreds of thousands of international tourists flock to the attraction, characterized by its brick towers arranged into three levels, according to Tran Van Binh, head of the attraction’s management.

Binh noted that many tourists arrive inappropriately dressed for the sacred towers.

“It disturbs the aesthetic beauty and sacredness of the towers, which embody the local culture and religious beliefs,” Binh said.

“Therefore, we have prepared overcoats for tourists who have dressed inappropriately so that they can still enter the attraction.”

Binh added that there are signs placed around the complex reminding tourists to dress properly.

“Our employees have also been trained to instruct visitors who wear shorts or sleeveless shirts to borrow the overcoats for free,” Binh said.

“The policy has so far been met with positive feedback and support from international visitors.”

The Ponagar Cham Towers in Nha Trang welcomes between 500,000 and 600,000 foreign tourists per year on average, most of whom are Chinese and Russian nationals.

The lawyers, Hisyam Teh Toh Teik and Naran Singh, were hired with agreement from Huong and her family alongside support from the Vietnamese Embassy in Malaysia and the Vietnam Bar Federation, the ministry said at a press briefing.

Vietnam’s consular officials visited Huong on Wednesday morning at Kajang Prison in Selangor to introduce her to lawyer Hisyam Teh Toh Teik, her new legal representative for future court proceedings.

Huong, saying her health is stable and her living conditions are acceptable, agreed to actively cooperate with her new attorneys.

Hisyam Teh Poh Teik is considered a leading criminal lawyer by the Bar Council of Malaysia, while Naran Singh has significant experience in criminal defense, the ministry said.

Both lawyers have agreed to provide Huong with the best possible legal defense and support.

Huong, alongside Indonesian national Siti Aishah, was charged with murder by a court in Western Malaysia for last month’s murder in Kuala Lumpur of Kim Jong-nam, believed to be the estranged half-brother of North Korean leader Kim Jong-un.

The two women were arrested following the death of Kim, who had been traveling using a passport under the name of Kim Chol, at a Kuala Lumpur airport on February 13.