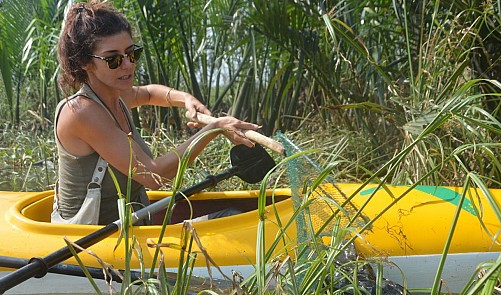 Tourists pay for garbage clean-up ‘tour’ on Hoi An river

For US$10, visitors to Hoi An City in central Vietnam can kayak along the city’s Hoai River on a mission to collect rubbish.

One day at a small wharf in Cam Thanh Commune, Hoi An City in Quang Nam Province, a group of nearly 30 tourists, mainly foreigners, just arrived to embark on a kayak ‘tour’ to collect trash from the Hoai River.

In teams of two, the eager tourists boarded 15 kayaks and set off in the brilliant sunshine, armed with garbage bags and trash hauling nets.

Julia and Ludwaj, two friends from the UK, sped to the front of the group. While Ludwaj steered the kayak, Julia weaved her net across the river’s surface, indiscriminately collecting garbage of all shapes and sizes.

Wiping sweat off her face, Julia said it had never occurred to her that she would one day pay to collect trash while riding a kayak, though it would be one of her most memorable experiences in Vietnam.

Further back were Céline, a 35-year-old French national, and a friend, who refused to leave any litter in their wake as they searched for garbage along the river’s edge.

This is not the first time Céline has collected trash on the river. Since the tour’s launch six weeks ago, she has participated every weekend.

Since moving to Hoi An nearly a year ago, Céline has started a local ‘clean vegetables’ project and is no stranger to similar trash-picking excursions at the local An Bang and Cua Dai beaches.

Four hours and nine kilometers later, the group finally made it downstream and parked their kayaks at a wharf near the Japanese Covered Bridge (Chua Cau) in Hoi An Ancient Town, a picturesque conclusion to their meaningful journey.

According to Nguyen Van Long, CEO of Hoi An Kayak Tours which organizes the trash-picking trip, the tour’s inspiration came from a ride along the Hoai River when he noticed how badly the river was polluted.

“My tour-takers and I are all happy to see that the river is getting cleaner and cleaner each day,” Long said. “I think cleanliness is a must for any city that wishes to become eco-friendly.”

Nguyen Van Son, deputy chairman of Hoi An City, said such “environmentally-minded” tours are a great contribution to realizing Hoi An’s dream of becoming an eco-city.

“We always encourage individuals and organizations to come up with new ideas to combine with saving the environment,” Son said.