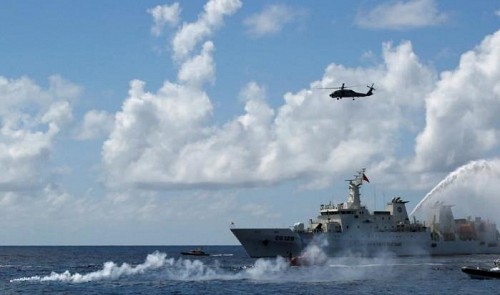 Vietnam on Thursday denounced Taiwan's military drills on and around a disputed East Vietnam Sea island, labeling them a serious violation of its sovereignty and a threat to maritime security.

China claims most of the energy-rich waters through which about $5 trillion in ship-borne trade passes every year. Neighbors Brunei, Malaysia, the Philippines, Taiwan and Vietnam also have claims.

Taiwan's claim to Vietnam's Ba Binh (Itu Aba) is complicated by the fact that China considers Taiwan sovereign territory. Taiwan and China both claim the East Vietnam Sea using old maps that date back to the late 1940s when the Nationalists ruled China.

The defeated Nationalists fled to Taiwan in 1949 after losing to Mao Zedong’s forces. Taiwan has been self-ruled ever since.

Taiwan's coast guard said that the live-fire drills around Ba Binh were routine. The scheduled drills began on Wednesday and end on Friday.

"Vietnam resolutely opposes (the drills) and asks Taiwan to not repeat similar actions," Binh said in a statement posted on the ministry’s website.