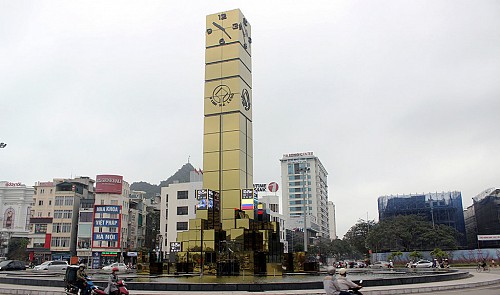 Authorities in Ha Long City, the capital of Quang Ninh Province in northern Vietnam, have confirmed that they had spent VND35 billion (US$1.54 million) building a clock tower in the heart of the city home to Ha Long Bay.

Pham Hong Ha, chairman of the Ha Long People’s Committee, said that the amount was used to fund construction and provide back-up capital.

After thorough evaluation, the design of Salvador, one of the world’s 10 most famous architects, who had designed several constructions in Quang Ninh, was selected for the project, Ha said.

The entire structure was built with special materials and is decorated with fountains and a lighting system.

The VND35 billion ($1.54 million) fund covered the cost of design, materials, and construction work, the official stated, adding that it was taken from the local coffers.

Similar to other projects in the city, the clock tower was built after assessment, inspection, and auditing had been completed, Chairman Ha said.

The tower was built in early 2017 and completed in late March.

It is 28 meters tall, while its frame is made of steel, weighing 18 metric tons.

A total of 16 LED screens are installed around the tower to display time in Vietnam and in countries across the world.