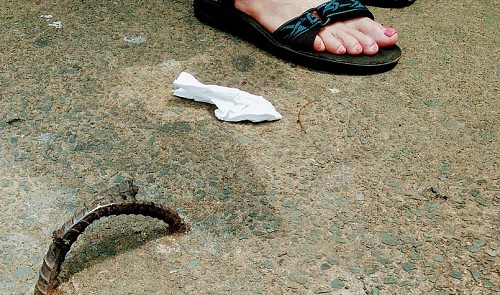 A foreign visitor who was hurt after stumbling on a street in District 1, Ho Chi Minh City after her foot caught a U-shaped iron hook buried onto the sidewalk earlier this week will receive apology and compensate from the company responsible for those ‘traps.’

Doan Ngoc Hai, District 1 deputy chairman and leader of a campaign to clear the district-wide sidewalks, made the order on Friday, after learning of the Tuesday’s incident of the female foreigner.

On Tuesday, Nguyen Tuyet An, a local journalist, posted on her Facebook several photos showing a woman with bleeding nose, saying she had fallen after getting stuck in the iron hooks on the sidewalk near the Nam Ky Khoi Nghia – Le Loi intersection.

The U-shaped hooks were scattered on the street surface and was not really visible to pedestrians. An said many people had fallen victims to such a ‘trap’.

The hooks have been identified as being placed there to catch hold of ropes used in the artistic lighting installations in the city in the Lunar New Year celebrations late January.

The constructor, Vien Dong Import Export Investmen Co. Ltd., should have removed those hooks after finishing the installation.

On Friday, Hai ordered that Vien Dong Co. publicly apologize to the victim and cover all the medial expenses for her injuries.

The company should find and remove all similar hooks left on the streets to ensure safety for pedestrians.

Shortly after the accident on Tuesday, local residents have put some bricks next to the hooks to help pedestrians avoid falling victim to the ‘traps,’ whereas Ben Thanh Ward sent workers to remove those hooks on Thursday.