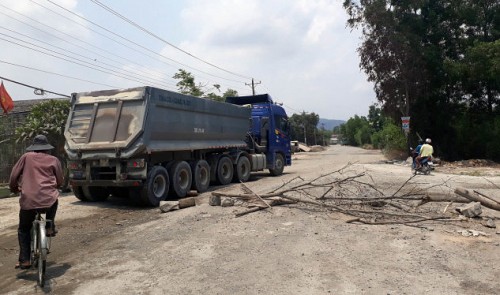 Residents in the southern Vietnamese province of Ba Ria-Vung Tau have blocked a local road as a last resort in their battle against the damage and pollution caused by trucks traveling to and from a nearby port.

The barricade first went up around 8:30 am on Wednesday, when residents living along the road leading to the Duc Hanh Inland Port in Tan Phuoc Commune, Tan Thanh District decided they had finally had enough.

Their efforts proved successful and local vehicles were completely unable to enter the port, leading to serious congestion in the area.

After being notified of the situation, police officers and local authorities arrived at the scene to convince residents to remove their blockade.

By 11:30 am the same day, the locals had agreed to clear half of the road and allow vehicles to pass, but only in one direction.

According to the citizens involved, the barricade was placed as a last resort to put an end to the heavy air pollution and road damage caused by large trucks traveling through the area on a regular basis.

Residents say respiratory problems brought about by the large volume of dust are becoming more common among the neighborhood’s children, while the street becomes dangerous and filled with muddy potholes after rainstorms.

Though the issue has been reported to local authorities on several occasions, government agencies have yet to put an end to the situation.

On Wednesday afternoon, the traffic police division in Tan Thanh District patrolled the street to prevent overloaded trucks from entering the area.

A probe by Tuoi Tre (Yuoth) newspaper showed that local businesses bought the land from residents to build the road in 1996.

The businesses pledged to turn it into a concrete road after three years – a promise they never kept.

According to Nguyen Van Tham, chairman of the Tan Thanh People’s Committee, working sessions will be convened to request that local businesses improve the street.