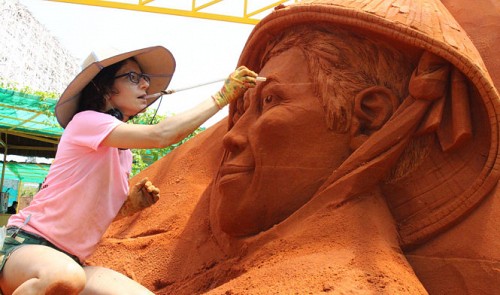 A handful of world-leading female sand sculptors are showcasing their flair at an international championship taking place for the first time in Vietnam.

The World Female Sand Sculptor Championship is organized from April 19 to May 2 at Forgotten Land Sand Sculpture Park in Phan Thiet, a beloved resort town in the south-central province of Binh Thuan.

The competition, themed “Fairy Tales and Legends of Vietnam and the World,” attracts eight world-renowned artists from the U.S., Italy, Belgium, the Netherlands, Spain, Australia, Latvia and Canada.

Among them, Latvian sculptor Agnese Rudzite Kirillova has claimed several coveted prizes, including the first place at the International Sand Sculpture Festival held in three consecutive years, 2013, 2014 and 2015, in Sweden, Russia and Latvia. “Sand sculpting remains in its infancy in Vietnam. The craft is generally associated with such materials as stone and wood,” Le Anh Tuan, head of the organizing board, said.

“Sand sculpture does not last long, but is rather artistically momentary. We thus invite foreign artists to demolish old ones and create a new batch of works on an annual or biennial basis,” he added.

The statues are crafted from red sand, which does not exist in abundance in Vietnam.

“As sand sculptors are so hard to come by in Vietnam, we host the competition partly to promote the art to those interested across the country,” he noted.