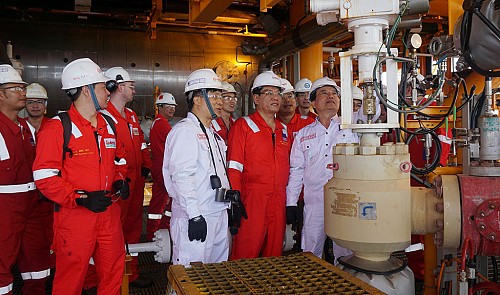 PetroVietnam to raise oil extraction target by 1mn tons in 2017

State-run oil and gas giant PetroVietnam (PVN) has announced plans to hike its yearly oil extraction by one million metric tons in 2017, following a government directive aimed at boosting the country’s economic growth.

According to Nguyen Quoc Thap, vice-CEO of PVN, the group’s plans to increase their oil extraction targets this year coincide with plans to raise production across all of its drills.

However, Thap admitted that waning global oil prices could be an obstacle to reaching the ambitious target.

If the global oil prices plateau at their current rate of US$55 per barrel, coupled with PVN’s economic and technological preparations, the group could still meet its target, Thap said.

Despite raising their production targets, PVN’s 2017 goals still lag behind its 2016 production, he added.

The group extracted 3.46 million metric tons of oil and captured VND117 trillion ($5 billion) in revenue in the first quarter of this year, 5.5 percent and 18 percent above its respective targets.

PVN hopes to make an additional $375 million in revenue in 2017 with its added production, assuming oil prices stay above $50 per barrel.

Thap noted however that the group’s increased revenue does not necessarily mean a significantly bigger contribution to the public budget, though he refused to disclose a specific number.

Dang Duc Anh, a senior analyst at the National Center for Socio-Economic Information and Forecast (NCIF), believes that PVN’s increased extraction will not be much of a boost to Vietnam’s economic expansion.

According to NCIF estimates, one million additional metric tons of oil in PVN’s production would only lead to a 0.25 percent boost to the country’s economy.

“Despite PVN’s 5.5-percent over-performance in production during the first quarter of 2017, its growth rate experienced a slight drop over the same period, reaching only 5.1 percent,” Anh said.

Sang pointed out that Vietnamese enterprises are spending $40 to extract each barrel of oil, while in Saudi Arabia and Russia the cost to extract a barrel is a mere $8-12 and $13, respectively.

PVN’s efforts to reduce its cost of extraction have not been successful, Thap noted, as it would require advanced technology and enhanced administrative capability.

Anh stressed that Vietnam would need to shift its focus to economic reforms and improvement of the business environment, rather than on increased oil production, if it wants to seek sustainable growth.

Vietnam’s crude oil is mainly exported to China, which imports Vietnamese oil at a much lower price than other markets, according to statistics from the General Department of Vietnam Customs.

According to the Ministry of Finance, crude oil production and exports contributed VND11 trillion ($491 million) to the government budget in the first quarter of 2017, with an expectation to reach VND38.3 trillion ($1.71 billion) by the end of the year, a15.9-percent increase from 2016.