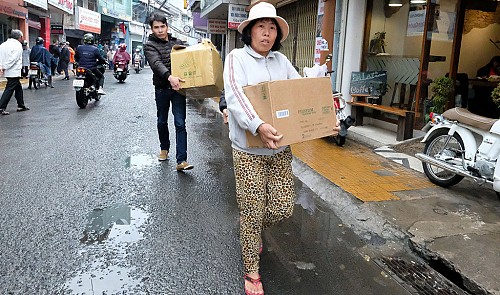 Residents living on two streets in Da Lat City have been told to prepare for an emergency evacuation after major cracks began appearing along the ground and in house walls.

Hoteliers and accommodation service providers in the vicinity have also been asked to temporarily pause their business operations while authorities investigate the cause of the reported damage to land and residences.

On Wednesday afternoon, the People’s Committee of Da Lat City in the Central Highlands region held an emergency meeting to review the condition of land on Nguyen Van Troi and Truong Cong Dinh Streets, where long, large cracks have been reported by residents inside their houses and on the sidewalks.

The cracks appeared early the same morning in as many as 13 houses, accompanied by signs of slight land subsidence.

Houses numbered 17-31 on Nguyen Van Troi were among the most gravely affected, with cracks appearing not only in walls but also on stairs, corners, and connections with nearby houses.

A thin, 30-meter long crack could be seen running along the pavement on Nguyen Van Troi Street, while several chopstick-sized cracks were also visible at the feet of houses in the area.

According to residents living on the two streets, the cracks have been growing larger and some houses have subsided as much as 5-10 centimeters.

“Local authorities stuck tapes on the cracks inside our house to monitor their growth, and from what we’ve seen the tapes have torn,” said Truong My Huong, a local resident. “We’re preparing to move out of this house.”

“A puddle of water appeared inside our house a few days back, and then disappeared just as suddenly,” said Hoang Thi Kim Thu, who lives at number 25 Nguyen Van Troi. “We didn’t give it much thought at first, but then the puddle reappeared this morning. We also heard crackling noises early in the morning as if somebody was breaking small logs. When we woke up we found that there were small cracks in the wall.”

Another local, Nguyen Tien Duyet, who lives at number 27C Nguyen Van Troi, said a door on the second floor of his house became impossible to open when he woke in the morning and crow-foot cracks began appearing all over his walls.

“The water meter at our house kept going up though we haven’t used water for a while,” said Pham Thi Nguyen Nhung, at number 29 Nguyen Van Troi.

According to local authorities, houses on these streets are built on what had formerly been the top of a small hill.

“We can safely omit geological fractures as a possible cause of recent cracks. If that had been the case, the affected area would have been much larger,” said Truong Huu Hiep, director of Lam Dong Province's Department of Transport.

Hiep suggested the cracks had been caused by either faulty architecture or damaged underground water systems that have weakened the soil.

He also warned that a domino effect might spread the cracks to nearby houses.

The administration of Da Lat City has banned all trucks and vehicles that can accommodate more than four people from the two affected streets to avoid causing further damage to the ground.

“The situation will get worse if it starts to rain,” Da Lat chairman Doan Van Viet said.

The city also invited geological experts from the Ho Chi Minh City University of Technology and the Vietnam Academy of Science and Technology to investigate the cracks.

In the meantime, three households in the area have already been cleared of residents, while those living in the remaining houses have been asked to prepare for immediate evacuation.