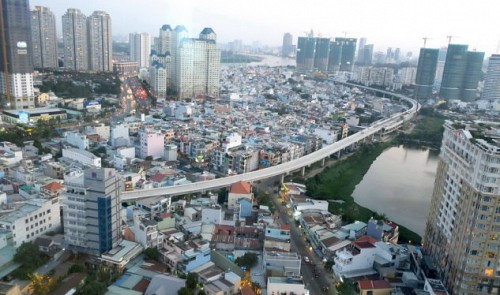 The future of two costly megaprojects in Ho Chi Minh City is at risk due to insufficient capital from the state budget.

The metro line No.1, the first-ever subway system in the southern Vietnamese metropolis, and the second phase of a project to improve the city’s water environment are both partially funded by official development assistance (ODA).

ODA is considered part of the state budget, with the government in charge of disbursing the money to specific projects.

However, the government’s ODA allocations for these Ho Chi Minh City megaprojects have been lower than needed, putting their construction on the verge of cessation due to a shortage of capital.

Since the third quarter of last year, Ho Chi Minh City has been using its own budget to pay contractors in order to keep construction going, but municipal authorities say this temporary solution cannot last long.

However, as of April 2017, only 34 percent of the total ODA pledged for the project had been disbursed.

The Ho Chi Minh City administration has repeatedly called on the Ministry of Planning and Investment and Prime Minister Nguyen Xuan Phuc for help, but no additional ODA allocation has been approved for the project in 2017.

Even when the loan is finally disbursed, the Ho Chi Minh City budget will still fall short of the funds needed to pay metro line contractors.

Last month the investment ministry submitted a report to the prime minister, expecting to allocate VND2.119 trillion ($94.6 million) from the ODA budget to the subway project in 2017, only 40 percent of the VND5.422 trillion ($242.05 million) the city needs for the project.

The project’s management board has called on the city’s administration to urge the investment ministry to adjust its allocation plan to save the project from a capital shortage.

Ho Chi Minh City has earmarked VND600 billion ($26.79 million) from its coffers for funding the metro project, and half the sum for the water environment project to temporarily continue construction work.

But the city’s authorities are calling for sufficient ODA disbursement so both projects can meet their completion targets, otherwise more money will be wasted on compensating contractors or paying interest on bank loans.