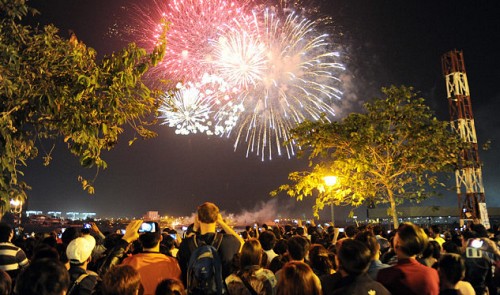 In mid-April, Ho Chi Minh City authorities filed a petition to the government, asking to host one high-range and three low-range pyrotechnic shows, along with other commemorative and artistic activities, on the evening of April 30.

The government then transferred the petition to the Secretariat of the Central Committee of the Communist Party, the Party’s highest implementation body, which eventually rejected the proposal.

“The Ho Chi Minh City Party Committee had officially consulted the Secretariat, which gave a ‘no’ answer on Tuesday,” the city’s deputy chairwoman, Nguyen Thi Thu, said at a meeting on Thursday.

Thu gave no further detail as to why the April 30 fireworks shows were turned down by the Party’s implementation body.

Last year, the Secretariat also requested that all provinces and cities not hold fireworks displays during Tet, or the Lunar New Year, falling late January 2017, and instead redirect funds earmarked for the shows to support the poor.

Salaried workers in Vietnam will have a long holiday, starting this weekend, celebrating Reunification Day and Labor Day (May 1). They will return to work on Wednesday next week.