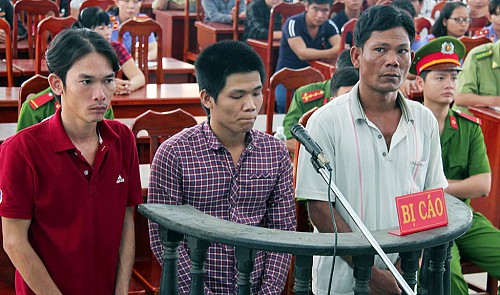 Three men from Dong Nai Province have been sentenced to prison for shooting dead a gaur and storing military weapons.

The People’s Court in Vinh Cuu District, Dong Nai, imposed jail terms on three men on Tuesday for “violating regulations on the protection of endangered species” and “illegally storing and using military weapons.”

Le Nguyen Anh Hung will be behind bars for five years on both charges, while Le Minh Tien will serve nine months for killing the animal.

Hung’s father, Le Thanh Son, was given a suspended sentence of one-year.

According to the indictment, in mid 2014, Hung discovered a gun similar to an AR15 along with a hand-made pistol and 10 bullets buried under a tree at a local forest.

On the evening of February 26, 2016, after drinking with his friends, Hung, accompanied by Pham Thanh Liem, took a gun and five bullets to the Dong Nai Culture and Nature Reserve, where he spotted a herd of gaurs.

He shot one of the wild animals dead, weighing around 200 kilograms.

Hung and Liem then called Tien, and the three men stripped 5.1 kilograms of meat from the gaur, which was then sold to Nguyen Thi Huong for VND6.1 million ($269.2).

They also took some of the internal organs of the animal.

Police in Vinh Cuu District arrested Hung and Liem on March 11 as they hid at Hung’s uncle’s house. Tien later turned himself to officers.

Son, who is Hung’s father, knew about the guns but did not hand them to the authorities until he was summoned to the police station.

The court found that Huong had not committed any offence as she was unaware that the meat belonged to a gaur, while Lime was not criminally charged as he was below 16 years old at the time.

Liem and Hung have been ordered to pay VND30 million (US$1,324) to the Dong Nai Culture and Nature Reserve.