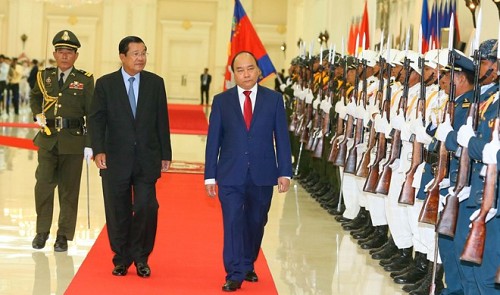 Vietnamese Prime Minister Nguyen Xuan Phuc and his Cambodian counterpart Hun Sen have conferred about measures to boost the two nations’ cooperation, as part of the former’s official visit to Phnom Penh on April 24 and 25.

Following an official welcome ceremony on Tuesday morning, the two heads of governments sat down for a talk regarding the two countries’ relationship, according to the Vietnam News Agency.

PM Hun Sen considered that the visit of his Vietnamese counterpart has historical significance amid the 50th anniversary of two nations’ diplomatic ties, marking the new phase of development for the Vietnam- Cambodia cooperation.

He believed that the trip would create a strong momentum for their traditional friendship and comprehensive collaboration.

The Cambodian premier praised the contribution made by Vietnamese investors to his home country’s development, stating that such businesses as military-run telecom group Viettel, Vietnam Rubber Group, and Vietnam Electricity (EVN) have not only operated efficiently but also paid sufficient taxes to the local government.

The two prime ministers agreed to continue promoting trade, services and cooperation between Vietnamese and Cambodian localities, particularly those situated along the borderline.

They pledged to facilitate and seek effective measures to boost partnership in trade and investment, banking, electricity, mining, oil and gas, transport, telecommunications, and education-training.

They also discussed measures to cement Vietnam and Cambodia’s mutual support in ASEAN as well as other regional and international organizations.

PM Phuc is scheduled to begin his official visit to Laos on April 26 and 27 after his trip to Cambodia.