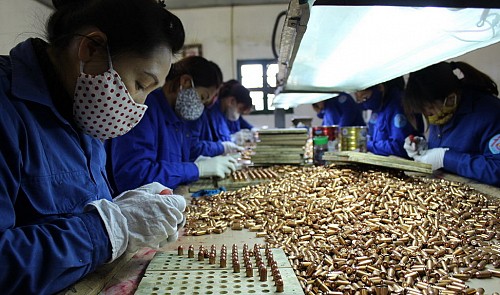 Amidst the mountains of northern Vietnam’s Tuyen Quang Province lies a valley where locals have been producing military ammunition for generations.

The valley is home to Z113, an 800-hectare ammunition manufacturing complex run by the General Department of Defense Industry that produces hundreds of thousands of bullets every day to supply Vietnam’s military units.

59 steps of making a bullet

Lieutenant Colonel Tran Quoc An led Tuoi Tre (Youth) newspaper on a tour through one of the factories that specializes in making K59, K56, K53 and K51 bullets used by infantry units.

The massive factory is almost entirely automated, with only a few workers dressed in army green working on sections of the assembly line.

Gesturing at the machines, An said bullet-making is an arduous task that involves up to 59 steps, 43 of which are required to assemble the case, with the rest needed to complete the projectile.

All the metallic components of a projectile must be cleaned, dried and hand-sorted with care before proceeding to the assembly phase.

The assembly room is air conditioned 24/7 to maintain a humidity level of between 50 and 65 percent at all times, with only five workers performing the tasks of sorting the cases, checking gunpowder quantity, manning the machines, pouring projectiles into a trough, and double-checking the quality of each bullet.

“Here we have an almost finished bullet,” An said, picking up a shiny yellow bullet off a tray. “After being assembled, the bullets must go through another round of quality testing and preservative painting.”

Preservative painting is the final step in making a bullet. Over 20 female workers perform the delicate task of painting a thin line of red paint around the rim of the bullet to prevent humidity from entering the cartridge.

“It’s not a physically challenging task, but it requires a lot of precision,” Thu Ha, one of the workers, said.

After being painted, the bullets are stored in a cool room for 24 hours before they are sorted into special metal cases, ready to be transferred to their respective military units.

The ammunition manufacturing complex is as old as the local community itself, encompassing all of the households that make up the town of Tan Binh.

Inside the complex is a kindergarten, elementary school, secondary school, market, hospital, and swimming pool that serve the local population.

Some families have had up to three generations devote their life to the making of bullets, including that of Major Nguyen Duc Thanh, head of the technological division of Factory One.

Thanh’s parents, siblings and relatives have all worked at the factory, and the same is true for his wife’s family.

“My wife is a quality tester,” Thanh said. “We were born and raised here, and so were our parents, so there’s a certain sense of attachment to the factory.”

His son Nguyen Trung Duc, who graduated two years ago from Hanoi University of Industry, has also returned to the valley to dedicate his life to the factory.

“On my first day at the factory, my father told me that our family had devoted our youth and wisdom to the factory for generations, and that it was my responsibility to keep up the tradition,” Duc said.

Z113 also produces ordnances and steel-piercing 7.62x54 millimeter bullets that can be costly to import from foreign suppliers.

The factory is working on mass-producing a 7.62x39 millimeter (K56) armor piercing bullet, the first of its kind to be fully manufactured domestically.

He was a senior official at scandal-hit PetroVietnam (PVN)