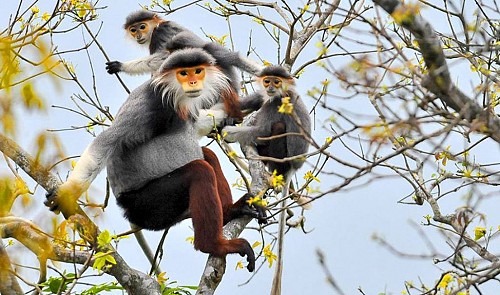 How many red-shanked doucs are left on Vietnam’s Son Tra peninsula?

While a recent independent study claimed that there are still over 1,300 red-shank doucs on central Vietnam’s Son Tra peninsula, primate experts believe the number to be much lower.

Red-shanked doucs are monkey-sized primates characterized by their golden face, black hands and feet, and maroon-red ‘stockings’ from their knees to their ankles.

The endangered species, native to central Vietnam, are known locally as ‘the queen of all primates’ due to their extravagant appearance.

On Monday, the Da Nang City Union of Science and Technology Associations and GreenViet Biodiversity Conservation Centre held a seminar to announce their findings of the doucs’ population status on Son Tra peninsula.

“Software calculation results showed that there are around 1,335 specimens of red-shanked doucs on Son Tra, which belong to around 237 troops,” said GreenViet’s lead researcher Bui Van Tuan at the seminar.

According to Tuan, his team had used the advanced distance sampling method to estimate the density and abundance of the douc population, a process that took the first three months of 2017 to complete.

Other primate experts in Vietnam have voiced their skepticism of the organization’s independent findings however, as they contradicted most other studies that showed that the douc population on Son Tra had shrunk to between 300 or 400.

Nguyen Manh Tien, head of the forest management and nature conservation division at Da Nang’s Forest Protection Sub-Department, argued that the numbers announced by GreenViet were “unofficial” and should only be used for reference.

Tien added that GreenViet’s scientists had conducted their study in a special-purpose forest and made the announcement without the permission of relevant authorities as required in Vietnam’s Law on Forest Protection and Development.

“According to the law, findings on any provincial, municipal or national level must be announced by an administrative body,” Tien said.

“Studies on forest wildlife must be overseen by the local forest protection sub-department, in cooperation with organizations, professionals and scientists. The study must then be accepted by a scientific council before its findings can be legally announced.”