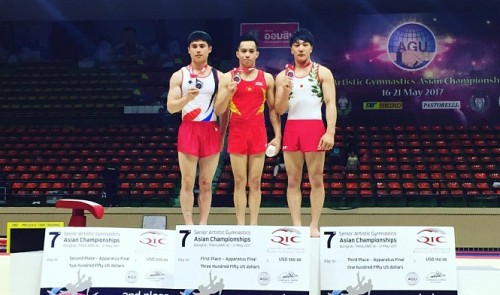 Vietnam has won its first-ever Asian Artistic Gymnastics Championships gold medal after Le Thanh Tung beat a field of strong contenders from South Korea and Japan in the men’s vault final, securing the top spot with a total combined score of 14,563 points.

At 22, Tung becomes the first Vietnamese competitor to strike gold at the championships, which concluded on Sunday.

“Vietnam has never won a gold medal at these championships before. Prior to this, we had previously only won silver, which was achieved by Nguyen Ha Thanh in 2013.”

The 2017 Asian Artistic Gymnastics Championships, the seventh edition of the region’s biggest gymnastics competition, was held in Bangkok from May 18 to 21.

One gold and one bronze meant Vietnam finished third at the championships, which were dominated by China, who topped the tally with 19 medals, 11 of which were gold.

The next best nation was Japan, whose athletes won two gold and two bronze medals.

After a successful Asian competition, the Vietnamese men’s gymnastic team will continue their training in China until early July as they prepare for the 2017 Southeast Asian (SEA) Games, to be held in Malaysia this August.