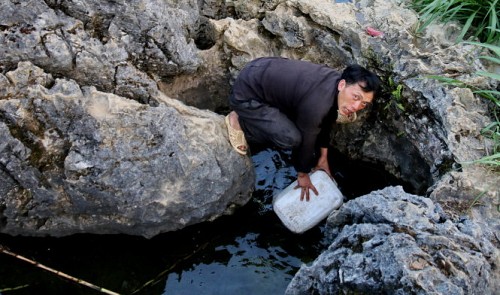 The ethnic minority Mong people in the northern Vietnamese province of Ha Giang have been involved in a water ‘war’ for decades.

For many years, the Mong people in Meo Vac and Dong Van Districts, part of the UNESCO-recognized Dong Van Karst Plateau, and other neighboring areas have suffered from a dire scarcity of clean water, particularly during dry seasons.

The way they obtain, use and store their hard-earned water supply is indicative of their incredible resilience in trying circumstances.

The Ly Cha Tung Hamlet in Sa Phin Commune, Dong Van District is dotted with clusters of homes on one side of a mountain.

Two large hollows sit at the foot of the valley, one of which is natural and the other man-made.

These are the main sources from which the 57 households in the hamlet obtain water.

On an afternoon in mid-May, a Tuoi Tre (Youth) newspaper reporter spotted local resident Vu Pa Sinh making his way through the hollows carrying two 30-liter water containers, one of which was on his back.

The shallow cavity Sinh sourced the water from is shaped like a crossbow three to four meters square in surface area.

The water inside appeared clean.

Another nearby pit is much larger with cement walls, but appeared to have limited supply.

Sinh then loaded two containers brimming with water onto his motorbike and continued his journey toward his home, perched on top of another nearby mountain.

In addition to his collected supply, there are two rudimentary tanks connected to troughs in his yard for rainwater collection; however, these were also leaking.

Having enough water is a constant struggle for Sinh’s five-member family.

“Used frugally, the two rainwater tanks can satisfy our basic needs for three months, while the supply from the hollows allows us to survive another two or three months,” Sinh said.

For the remaining six months, he must pick up water from nearby Thai Phin Tung Commune.

“The new suspension reservoir in Thai Phin Tung came as a blessing,” Sinh added. “It saves us from time-consuming trips and long waits further afield.”

His family uses at least two 30-liter containers per day, with most of the water drunk by his herd of cattle.

Only a small amount is used for cooking and drinking. Sinh’s family mostly rely on the hollow and the suspension reservoir in the neighboring commune for personal hygiene, including taking a shower and washing clothes on a weekly basis.

The asphalting and expansion of the road from Sinh’s home to neighboring communes have eased the burden his and other families must take in their ‘quest’ for clean water.

His motorbike also spares him from the long, arduous walks he would have to take years ago, when he would make his way on foot for several hours at a time.

These walks would involve dozens of kilometers on tough roads in baking heat in search of the very few lakes or ponds left.

With only simple containers such as plastic cups, they poured the muddy water, filled with sand and sediment, into old plastic bottles to bring home.

They would then wait until the sediment had settled to the bottom before using the water.

The area is also known for its shortage of food and the number of young people working in China, given the fact that Ha Giang Province borders the Chinese Yunnan and Guangxi provinces to the north.

In 2002, a suspension reservoir was built in Sa Phin Commune to tap into a water supply that flowed down a limestone mountain to the south of Sa Phin A Hamlet.

The low-capacity lake has been almost completely idle for a few years now however, with its floor practically exposed.

Another suspension reservoir, with a capacity of 3,000 cubic meters, was constructed to the north of Sa Phin A Hamlet in 2008.

The pool, however, encountered technical problems and is currently under repair.

State-agencies and schools have also been affected by the periodic scarcity of water, which can last several months each year.

“We all have to purchase water. Schools can buy water from Lung Tao Commune for VND1.2 million [US$52] per truck, or six cubic meters, thanks to some good ‘connections,” Kia, Sa Phin Commune’s deputy chair, revealed.

“Meanwhile, the local People’s Committee get their supply from Yen Minh District for VND1.5 million [$65] per truck,” the official added.

In such institutions, water is invariably kept under strict control, with a staff member entrusted with keys to make sure the ‘prime asset’ is being used properly.

In the midst of another water scarcity during early May, the district administration approved an allocation of VND20 million ($871) for the People’s Committee and one local boarding school to purchase water.

According to Dinh Chi Thanh, deputy chair of the Dong Van People’s Committee, more than 70 percent of the district is covered by rocks, which makes it difficult for vegetation to grow, let alone thrive, and results in forest coverage of around only 35 percent.

The district’s administration has thus come up with several strictly enforced water protection measures, including forest protection, in which residents are forbidden from felling trees or fetching wood in a bid to maintain moisture and the natural ecosystem.

Apart from storing rainwater, resourceful farmers have devised other ways to collect water, ranging from reinforcing natural rock cavities to retain as much water as possible, to using pipes to carry moisture from the mountains to their homes.

Thanh, deputy chair of the Dong Van People’s Committee, revealed that security teams are frequently deployed at the suspension reservoirs throughout the district to safeguard water supply, as well as monitor and regulate residents’ usage in times of crisis.