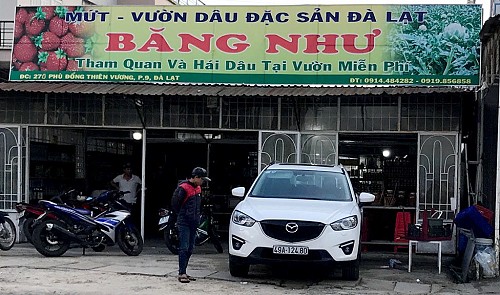 A female customer was violently beaten on Wednesday by the owners of a store selling local delicacies in Da Lat City after attempting to return a bottle of mulberry juice she had been tricked into buying.

The victim suffered from flesh injuries and was taken to the hospital for treatment.

Tran Ngoc Bich, 44, was driving her niece around Da Lat on Wednesday when a man on a motorbike approached the pair and invited them to a local mulberry garden where he said they could buy freshly picked mulberries for VND20,000 (US$0.88) per kilogram

Here Bich was told that she would only be given directions to the mulberry garden on the condition that she bought something from the store.

Left with no choice, Bich bought a bottle of mulberry juice for VND100,000 ($4.41) and was led to the mulberry garden as promised.

Finding the price unacceptable, Bich returned to the store where she bought the mulberry juice and asked to be refunded for the product she had been tricked into buying.

After store employees refused to comply, Bich demanded she speak to the owner.

According to Bich’s statement at the local police station, the store owner arrived shortly afterwards on a motorbike, accompanied by a woman, supposedly his wife.

Together with their employees, the couple came at Bich, cussing and beating her violently until she hit her head on a nearby car and passed out.

Bich was taken to the hospital after the ordeal where doctors said she suffered from flesh injuries on her hands and head.

At the police station, the store owner Luong The Vinh, 32, admitted to the beating, though he maintained that Bich’s hand and head injuries had been caused by her falling by herself.

According to Vinh, his actions were instigated by Bich slapping his wife and raising her voice while pointing her finger offensively at the store banner.

The administration of Lam Dong Province has attempted to rectify the activity multiple times without much success.