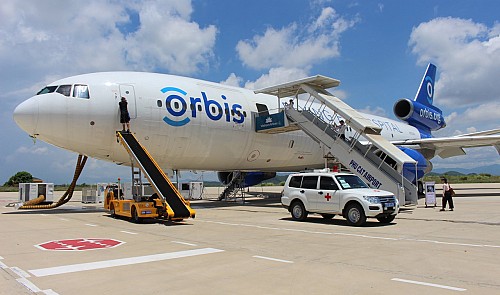 The Orbis Flying Eye Hospital has arrived in the south-central Vietnamese province of Binh Dinh to begin an ophthalmology training program for local doctors and nurses.

On Tuesday morning the third iteration of the Orbis hospital landed in Quy Nhon City, Binh Dinh, to begin training medical practitioners from the province’s eye and general hospitals between May 29 and June 9.

According to Dr. Jonathan Lord, Global Medical Director at Orbis, a survey by the organization showed that cataract is still one of the main causes of blindness in Vietnam.

About 75,000 children have eye diseases and some 400,000 more suffer refractive errors in the south-central region, including in Binh Dinh.

Nguyen Tuan Thanh, vice-chairman of the provincial People’s Committee, said that the training program was within the framework of the cooperation between Orbis and Binh Dinh in developing better eye care and treatment.

During the two-week stay, the organization will provide basic to advanced courses on eye surgery that are known to treat cataract, vitrectomy, retina, and other ocular diseases, Thanh explained.

The training program will also include specialized lessons on the latest theories and surgeries, knowledge on how to correctly diagnose as well as consultations for local doctors, nurses, and medical technicians.

Orbis has previously provided professional training for doctors in the Mekong Delta city of Can Tho and performed surgeries on local patients with severe eye diseases.

Established in 1982, Orbis is a non-governmental, non-profit organization that has so far offered about 200 training programs in 89 countries around the world.

Orbis runs the world’s only ‘flying eye’ hospital that operates out of an MD-10 aircraft.