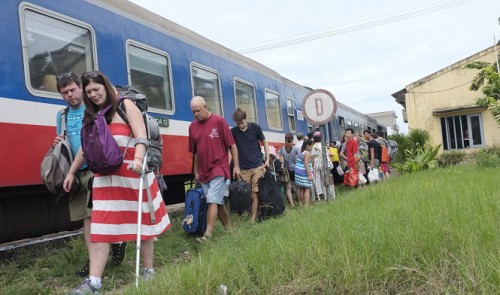 Contrary to the robust growth of the road and air travel sectors, Vietnam’s railway industry has been gradually losing market share, easing into a reputation as a less attractive option for individual passengers, and logistics and transportation companies alike.

The situation only seems bleaker after a plan calling for private investment to revitalize the railway sector went largely ignored.

Since then, that number has been in continual decline, slipping to only 1.98 percent of the passenger market, and 1.33 percent for cargo in 2016.

Le Van Phuoc, director of a handicraft maker in Ho Chi Minh City, said there is in fact a real demand for transporting goods by train thanks to stable costs and low risk of damage during delivery.

Doan Minh Tai, deputy director of a fertilizer company, said one of the biggest problems of road transportation is the chronic traffic jam at the entrances of major cities.

“Regular traffic congestion results in late delivery, something we don’t worry about if we transport by train,” Tai said.

But Phuoc and Tai, as well as many other local businesses, do not turn to the railway sector for logistics services.

The train sector has missed the opportunity to grab demand for safe, affordable cargo transportation from local businesses, and they can blame no one but themselves, according to critics.

“While road transportation companies are active in seeking customers and offering incentives to attract orders, the railway sector still thinks that they do not have to ‘serve’ anyone,” one businessman explained.

Nguyen Manh Sinh, a business owner in Ho Chi Minh City, said the railway sector is only responsible for bringing goods from A to B, and does not care what will happen next.

“Businesses have to hire a third-party service to continue carrying the goods to their final destination once the cargo is unloaded [at the train station],” Sinh said.

Other industry insiders said another disadvantage of the railway system in Vietnam is that it does not connect with the country’s seaports.

“Businesses will have to pay for intermediary services to bring their goods from the seaport to the train station,” Do Dinh Duoc, deputy general director of the Saigon Railways, admitted.

In 2014, the Ministry of Transport approved a master plan to solicit investment from the private sector to help develop the railway sector, hoping to attract non-state capital to upgrade rail tracks, renew stations and improve service quality.

One of the core aspects of the plan involved seeking private operators for 13 train routes.

If proved effective, the plan will be expanded in a way that the entire railway system would be transferred from the state to the private sector.

However, even the initial goal has not been met.

Some major corporations, both local and international, have signaled plans to invest in the Hanoi or Saigon train terminals, but eventually decided to back off, according to the deputy minister.

Dong added that the ministry is seeking investors for a project to build a railway route connected with Hai Phong Port, an international gateway in northern Vietnam, but the call has so far gone unanswered.

“The initial investment needed for the project is US$1.55 billion in phase one alone,” Dong explained.

Huge investment cost is the main reason why the call for the private sector to join in developing Vietnamese railways is not responded, the deputy minister said.

“We cannot apply the BOT [build-operate-transfer] scheme as the cost to develop a railway route is considerably larger than a roadway,” he said.