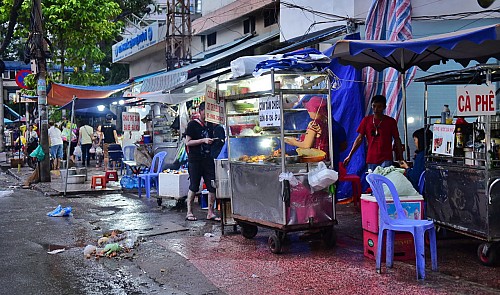 Residents of Ho Chi Minh City may be able to operate their businesses on local sidewalks for a fee, as part of a new proposal.

The municipal Department of Transport is gathering feedback from local experts and citizens on a proposal to rent the city’s sidewalks.

According to the agency, leasing local sidewalks for a fee will contribute to the city’s budget, which will then be used to upgrading streets and other traffic infrastructure.

The deal will also encourage businesses to be more responsible whilst running their operations on footpaths.

According to some, the rental system is a better way to manage the occupancy of promenades and roadways, as well as ensure traffic safety and urban aesthetics.

An official from the finance office under the transport department, said that rental rates would be calculated based on the price of land in each neighborhood.

The approach has received positive feedback from leaders of local authorities, the official added.

According to Le Minh Triet, director of the Management Center of Sai Gon River Tunnel, his agency will produce a report on applying technology to collecting the rental amounts.

Upon collecting community opinions, the proposition will be submitted to the Ho Chi Minh City People’s Committee for approval, and is expected to be implemented later this year.

Assistant Professor Nguyen Trong Hoa, former head of the Ho Chi Minh city Institute for Development Studies, expressed his support for the plan by saying that it would be an effective tool to manage the use of sidewalks.

However, the committee needs to be transparent throughout all phases of the scheme, Hoa said.

According to Dr. Vo Kim Cuong, former deputy chief architect of the southern metropolis, local businesses are already allowed to use a section of footpath to continue their operations.

Occupants also need to be charged a fee as sidewalks are public spaces and should not be freely used for personal purposes, Dr. Cuong said.

Traffic expert Pham Sanh recommended that the collection of rental fees not be undertaken by district or ward-level authorities in order to prevent corruption and other potential negative side-effects.

“The process should be carried out by the city’s financial sector with technical assistance from the Department of Transport,” Sang elaborated.

They are concerned that implementing the plan is no different than encouraging the occupancy of public space.