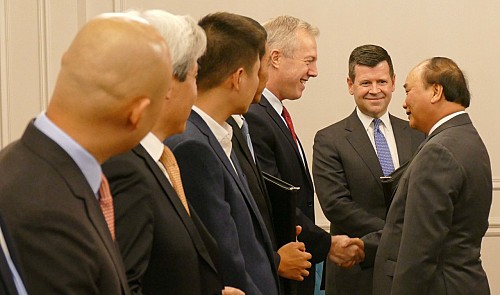 Premier hopes for investment by US into Vietnamese businesses

Vietnamese Prime Minister Nguyen Xuan Phuc has expressed his hope that local businesses can attract more investment from the United States during his meetings with leaders of one U.S. corporation, part of his agenda during his first day in New York.

PM Phuc arrived in the ‘Big Apple’ on Monday morning (New York time), commencing his official visit to the U.S. from May 29 to 31, at the invitation of President Donald Trump.

Upon his arrival, the Vietnamese head of government met with Bob McCooey, senior vice president of Nasdaq’s Listing Services unit.

During the talk, PM Phuc assured the financial leader that the Vietnamese government would welcome and provide favorable conditions for Nasdaq to cooperate with Vietnamese businesses.

He hoped that Vietnamese enterprises would attract investment from the U.S. and be able to carry out their operations in the U.S. marke

During his first day of the visit, the premier also convened meetings with the Vietnamese community, business leaders and intellectuals in New York.

The Vietnamese government will provide favorable policies to assist overseas Vietnamese, allowing them to contribute to the national development of their home country, PM Phuc stated.

He also met with Merle Ratner, a New York activist, and her Vietnamese husband, Prof. Ngo Thanh Nhan, thanking the couple for their support in boosting the two countries' relationship, especially in dealing with war consequences.

On the evening of the same day, the leader visited staff members of the Vietnamese delegation at the United Nations.

On his second day in New York, PM Phuc is scheduled to join talks with Secretary-General of the United Nations Antonio Guterres before attending a ceremony marking the 40th anniversary of Vietnam joining the UN.