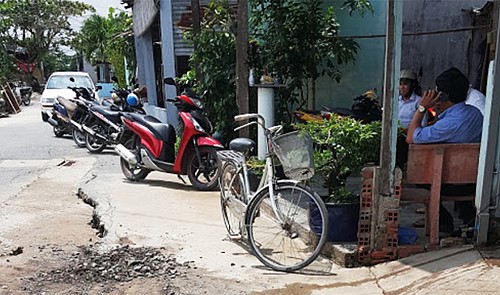 A crack near a river in an outlying district of Ho Chi Minh City sparked concern over the potential risk of subsidence in the neighborhood.

The 40 meter long fissure was discovered near the Rach Tom River in Nhon Duc Commune, Nha Be District sometime between 5:00 am and 6:00 am on Tuesday, the Inland Waterway Management Unit of the municipal Department of Transport confirmed on Wednesday.

The crack was two to six centimeters wide and ran between one and six meters from the riverbank.

Reports from competent authorities state that several nearby households also reported cracks along their walls.

An Initial evaluation indicated that the split could potentially lead to subsidence in the 500 to 600 square meters surrounding the area, including eight brick houses, a section of a street, two concrete utility posts, part of the underground water supply system, and a bridge.

The Inland Waterway Management Unit requested the People’s Committees of Nhon Duc Commune and Nha Be District issue a relocation of the affected households for the sake of their safety.

Warning signs will also be erected around the area to notify local citizens.

The agency asked the city’s Department of Transport to carry out a comprehensive assessment of the situation in order to prepare a suitable contingency plan in the event that the area actually does subside.

It also proposed a project to fortify the riverbank to prevent subsidence in the affected neighborhood.

About 47 locations across Ho Chi Minh City currently face the risk of riverbank collapse, 25 of which face a serious threat, according to statistics of the Inland Waterway Management Unit.