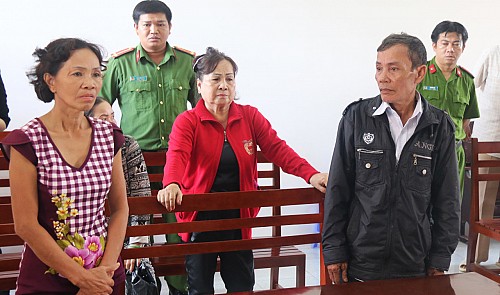 The People’s Court in a Mekong Delta city in Vietnam has once again ruled in favor of a local woman in a six-year-long lawsuit between her and a lottery ticket agent.

Managers of Trieu Phat, who failed to appear at the trial, will be forced to compensate Tuyet VND1.5 billion (US$66,032) in accordance with the court’s decision.

However, Tuyet’s request for an additional VND50 million ($2,201) to cover her legal fees during the six-year lawsuit was denied.

According to the case file, on July 22, 2011, Tuyet and some of her family members brought a lottery ticket with the numbers “938368” issued by the An Giang Lottery Ticket Co Ltd to Trieu Phat Lottery Agency in exchange for their jackpot prize of VND1.5 billion.

Ngo Xuong Phuc, owner of Trieu Phat, directly received and checked the lottery ticket before announcing that Tuyet had won the cash prize.

Phuc then wrote the winner’s information on the back of the ticket and gave it back to Tuyet’s uncle, Tran Thanh Phuong for his signature.

Both sides reached an agreement that Tuyet would pay a VND6 million ($264) commission to Trieu Phat and she would receive her jackpot in 20 taels of gold and the remainder in cash.

Phuc then submitted the signed ticket for re-verification, when it was later asserted that the ticket was not real because some numbers had obviously been glued onto it.

Phuc refused to issue Tuyet’s winnings and his nephew called police to the scene.

During the trial, Judge Vo Thi Thu Trinh stated that An Giang Lottery Ticket Co Ltd had not signed a contract authorizing Trieu Phat Lottery Agency to issue the prize.

The judge also asserted that the lottery agency exchanging the winning ticket without authorization violated the law on civil transaction.

Ngo Minh Dung, a representative of the Institute of Criminal Science under the Ministry of Public Security, reviewed the case using security camera footage and the results of his own evaluation.

Dung’s evidence showed that Phuc first received the lottery ticket from Tuyet with his left hand before walking to the back of the venue.

Upon his return, the man took out a piece of paper “the size of a lottery ticket” with his right hand and gave it to Phuong for his signature, proving Phuc had switched the winning ticket with a fake one.

After reviewing the evidence, the jury ruled that Trieu Phat is responsible for issuing Tuyet her original jackpot prize.

Both sides are allowed to appeal the court decision within 15 days, as per the law.

Despite the decision, Tuyet did not seem too happy, considering the case has taken nearly six years, three official trials, and countless unsuccessful negotiations.

In April 2016, the trial court in Rach Gia ruled in favor of Tuyet. However, the appellate court in Kien Giang later denied the ruling and requested the Rach Gia People’s Court review the case from the beginning.