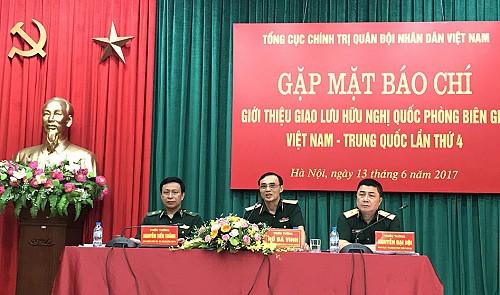 Vietnam, China to carry out joint anti-terrorism drill at border

Vietnam and China are expected to participate in a joint anti-terrorism exercise as part of the upcoming border defense friendship exchange program between the two nations.

Within the framework of the Vietnam- China border defense friendship exchange program in the northern Vietnamese province of Lai Chau and Chinese province of Yunnan, the two countries will join in their first-ever joint anti-terrorism training between June 20 and 22.

The agenda was announced by the General Political Department of the Vietnam People’s Army at a press meeting on Tuesday.

The activity will begin after the official visit to Vietnam of Senior Lieutenant General Fan Chang Long, Vice Chairman of China’s Central Military Commission, which is set to take place on June 18 and 19.

According to the agenda, Senior Lieutenant General Fan will join talks with General Ngo Xuan Lich, Minister of National Defense before leading a delegation of Chinese officials to greet leaders of the Vietnamese Party, state, and government.

Regarding the joint anti-terrorism training, Major General Nguyen Tien Thang, an official from the Border Guard Command, told Tuoi Tre (Youth) newspaper that hundreds of officers from the two countries’ border guard units will take part in the activity.

During the drill, the border guards are expected to deal with a group of 10 terrorists attacking the border area between Vietnam and China.

Both countries have spent months on preparations for the joint training in order to ensure safety for the participants, Maj. Gen. Thang said.

The program is aimed at cementing the friendship and solidarity between local governments, people and border guard forces, enhancing political trust and strengthening ties between the two countries and their militaries.

Aside from the cross-border drill, the event will also include a seminar and art exchange, the inauguration of the Vietnam-China Friendship and Culture House, and a conference to review the ties between villages of Lai Chau and Yunnan Provinces.