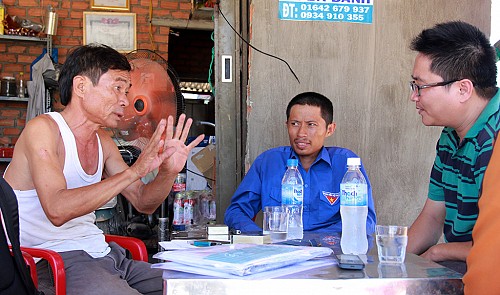 A man from the south-central Vietnamese province of Quang Ngai has stabbed himself multiple times, and later shared the self-filmed footage on social media as a way of seeking justice following unfair treatment by local authorities.

Le Van Tho, a resident in An Ky Village, Tinh Ky Commune, uploaded a video on Monday to his Facebook page, showing self-inflicted stab wounds on his neck and chest, as a last resort to get some attention to his case.

Speaking to Tuoi Tre (Youth) newspaper on Tuesday, Tho said he decided to make the video to express his resentment at the Quang Ngai Fishing Port Management Committee.

The footage was filmed on May 30, Tho said, adding that he had uploaded on Monday as he could not bear the injustice any longer.

“Leaders of Tinh Ky Commune have asked me to remove the video from my Facebook page,” Tho added.

According to the villager, his family owns a 2,400 square meter piece of land inside the Sa Ky fishing port.

Tho claims the facility has been put into operation and open for lease without any compensation to his family.

Le Van Phung, his father, confirmed that they had filed a document to ask for the rental of a section of the port.

During a working session on April 28, the Quang Ngai Fishing Port Management Committee agreed in a document to let Tho’s family operate their business in the facility.

However, that land slot was later leased to Diem Hung Company on May 19, as the firm “has a close relationship with some members of the management committee,” Phung continued.

Tran Dinh Tien, chairman of the Tinh Ky Commune, said that the case had been submitted to the provincial administration and Department of Agricultural and Rural Development.

Tho has a reasonable excuse for his actions, Tien assessed.

He also said the agency had shown bias toward the Diem Hung Company.

The fishing port was in need of money to continue its operation, while Tho’s family had no detailed plan for their business upon leasing the section.

Another official of the management committee admitted that a member of the agency had a share in Diem Hung Company.

According to the Tinh Ky People’s Committee, the rental contracts were signed without transparency and coordination with local authorities, creating opposition from local residents.