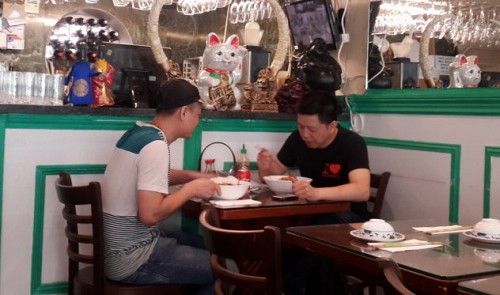 Despite the UK government’s constant efforts to deter illegal immigrants, many Vietnamese continue to cling to their ‘British dream’ of starting a new life on foreign soil.

Luong, Le and Cuong, aged between 25 and 42, have one thing in common: they are Vietnamese who left their hometown in the north-central province of Nghe An to move to the UK illegally.

Locals refer to them as ‘straw men,’ or people who live in the kingdom without official papers.

The oldest among the three is Cuong, 42.

Cuong reached the UK via a flight from Vietnam to the Czech Republic, before crossing the woods into Germany and then into the northern French town of Calais.

From there, he was picked up by a human trafficking ring and transported into the UK in the back of a cramped truck, along with others like himself.

The first thing he did upon landing on UK soil was to reach out to other illegal Vietnamese immigrants like himself in Manchester, only to be forced to move to London shortly later as the jobs he found in Manchester proved unsuitable.

Cuong has since remained jobless and the pressure of repaying the money he borrowed to afford his illegal immigration is mounting.

“Prior to crossing into the UK illegally, I had learnt to cook as advised by my friends who had been in this situation before,” Cuong said. “However, Vietnamese restaurants in London are hesitant to hire illegal immigrants, as they can face heavy fines if they are found to be using undocumented laborers.”

Luong and Le are faced with the same problem.

“I’ve borrowed a large sum of money at home, and I’m hoping to repay the debt once I get a job here,” one of them said. “As you can see though, I have no job and my family is being sought by my creditors.”

Ngoc Trinh, a Vietnamese-British citizen who owns a nail salon in London, said the UK government had been tougher than ever on illegal immigrants, and one of their main targets was undocumented Vietnamese laborers.

Any business owner found hiring one would be subject to a fine of up to 10,000 pounds ($12,600) for each undocumented worker, Trinh said.

According to Trinh, British authorities had conducted massive raids on nail salons and Vietnamese restaurants in London recently, arresting hundreds of Vietnamese, Filipinos, and Chinese who had immigrated illegally to the UK.

Tran Van Su, who runs a popular franchise selling traditional Vietnamese food in London, said that in the past he had hired illegal Vietnamese immigrants with the idea of providing them with a job to help them settle in their new country.

However, Su said, he had not dared to do so lately for fear of violating immigration laws.

“Frankly speaking, without a decent job, these undocumented immigrants can be easily persuaded into committing serious crimes such as growing marijuana,” Su said. “They all borrowed large sums of money to get into the UK, and therefore are forced to do anything to repay the debt. I want to help them, but I must respect the UK’s laws.”

Many Vietnamese in the UK have been living the life of undocumented immigrants for over ten years.

Some of them can speak English, but for the majority of these immigrants language remains the wall that separates them from integrating into the local community.

These English-illiterate Vietnamese often crowd together in small and secluded ghettos, with their lives revolving around working from dawn to dusk and sparing whatever they can to send to their families in their homeland.

She now lives in a shared apartment with a fellow Vietnamese who works to feed his wife and children at home.

Bony and pale, Mai’s appearance is a reflection of her destitute life in the foreign country.

When she first came to the UK, Mai said she had been scared to meet with anyone, and had retreated into the house of her masters, who had hired her to look after their children.

“Day in day out, I would work like an ox for the whole day and get a little sleep at night to restore my energy for the next day,” Mai said. “I had to grin and bear through sickness, as I couldn’t go to the hospital as an undocumented immigrant. I have thought of ending my miserable life multiple times, but didn’t have the courage to leave behind my parents and siblings who depend on my money to get by.”

Minh, from north-central Quang Binh Province, came to the UK in 2011, said he wished for nothing more than to leave this shameful life and return home.

“My parents, wife and children all live in Vietnam,” Minh said, breaking down in tears as rain came down around him. “I’m so sick of this undocumented life. It may be harder in Vietnam, but at least that’s where my home is.”