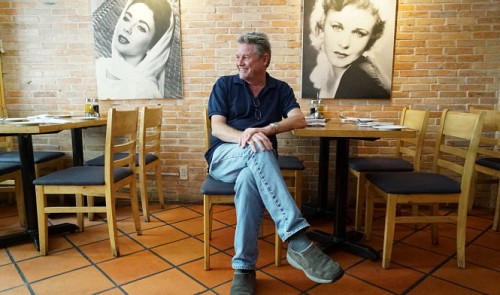 Throughout his life here, the seasoned British restaurateur has enriched Ho Chi Minh City’s food scene with a chain of bistros specializing in an array of exotic culinary delights.

His words are reminiscent of Queen Elizabeth I, who famously said, “I have already joined myself in marriage to a husband, namely the Kingdom of England.”

He says he has more than 100 ‘children,’ otherwise known as his cheery, persevering staff members, who all speak fondly about their loving ‘father.’

Born into a catering family, Fox began working at a restaurant opposite his Yorkshire home at 16 after quitting high school.

In 1985, he moved to New York to begin working as Food and Beverage manager at Peter Stringfellow’s infamous, luxurious night club.

He also washed dishes at another restaurant in his initial pursuit of success in the catering industry.

A turning point came on Black Tuesday, the 1987 stock market crash which turned the economy and people’s lives upside down.

It was then that it dawned on Fox that managing a nightclub, no matter how lavish, had no future.

He then took on the job as general manager of an Italian chain in New York which had seven locations, and it was then that his ambition began to be noticed.

However, Fox soon left New York in 1996 to run his family’s restaurant back in England.

After struggling with it for a few years, he realized he was not cut out for running a business in England.

Managing to respond to his circumstances in a positive way, he soon found himself overseeing a famous resort in Hua Hin, which had since the 1920s grown from a quiet fishing village into a fashionable escape in Thailand.

It was there that a restaurateur who was investing in a large wine bar on Dong Du Street in downtown Ho Chi Minh City approached him and insisted he work for him.

After six No’s, he finally said Yes on her seventh attempt for reasons which remain unknown.

It was then that he became love-struck with the city, which reminded him of New York.

The wine bar, which he started in 2004, was tucked away on tranquil Dong Du Street amidst the city’s hustle and bustle.

It was a replica of the narrow streets in the Italian quarter of New York which are lined with cozy eateries filled with customers known to the owners on a first-name basis.

The opportunity to start up his own business, however, did not come until a few years later in another part of the city.

In 2010, during a stay in Thao Dien, District 2, an area which remains packed with expats, he realized there was a promising market and decided on a location next to the Saigon River for his Blu restaurant. The bistro’s welcoming ambience still appeals to diners to this day and remains a perfect choice for those with children for family get-togethers.

It features a wide range of dishes typical of Vietnamese, European and Korean cuisines that draw an expanding expat clientele.

The restaurant’s specialties please diners’ senses and continue to tempt even the most jaded palate.

Ciao Bella, which has received high praise on popular travel site TripAdvisor, features dishes in the style of the ‘New York Italian’ he knows. The diner offers a charismatic blend of Italian gastronomy, culture, and history, including manually-kneaded bread dipped in special sauces.

Other specialties include beef cheeks ragouted in red wine and served with tagliatelle, a traditional type of pasta; and burrata, fresh Italian cheese made from mozzarella and a cream which combines perfectly with tomatoes and vegetables.

Pizzas prepared are also a far cry from their fast-food counterparts.

Though Ciao Bella mainly targets the city’s expats, it has been increasingly popular among city-dwellers and tourists.

Saffron introduces Mediterranean gastronomy to local diners, while Portofino is best known for its seafood.

In 2016, Fox added Twenty One to his bistro chain, which fuses European with Asian culinary delights.