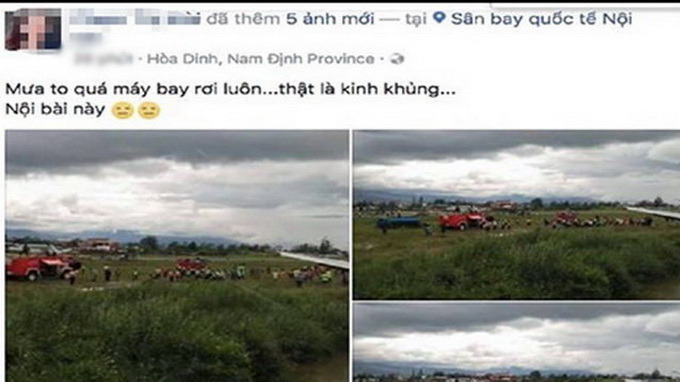 Police have summoned a woman for questioning regarding her made-up story of an air crash near Noi Bai International Airport in Hanoi.

She had allegedly wanted to gain more followers on Facebook through the viral content for the benefit of her online cosmetics shop.

The hi-tech police unit of Hanoi on Saturday summoned P.T.M., the owner of a namesake Facebook account, for interrogation over her fake story concerning an airplane accident in the capital.

According to M.’s statement at the police station, she had used her social media account to share photos of an ‘air crash’ near Noi Bai on Thursday.

“The rain was so heavy that it brought down an airplane… Horrible…,” the caption of M.’s photos reads in Vietnamese. “This is Noi Bai.”

In the photos, fire trucks and emergency responders could be seen approaching a plane which had apparently crashed into an open field.

Nguyen Huy Duong, deputy director of Noi Bai International Airport, denied the existence of such an aviation accident, saying the photos had been taken from a drill.

M. admitted that she had found the photos on the Internet and decided to attach to them an invented story with the intent to attract likes and followers to her Facebook account.

She had hoped that the improved interactions would benefit her business of selling cosmetics through the account, M. said.

Hanoi police said they were consolidating case files to propose an appropriate disciplinary action against M. for spreading the fake news.