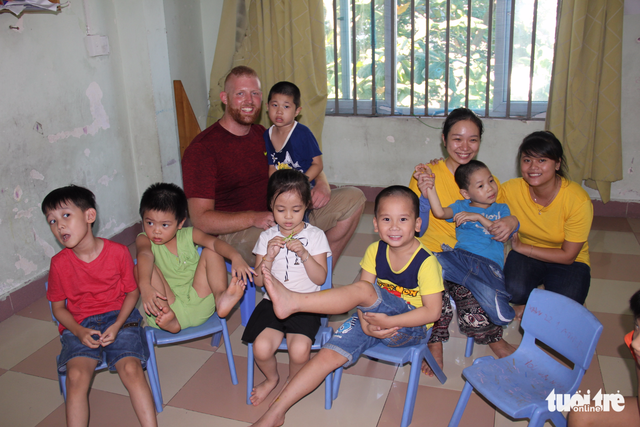 A trainee teacher from Denmark is packing kindergarten classes in central Vietnam by using fun, novel learning experiences and showering his special needs students with care and devotion.

Nikolai Hansen, 28, is working as a teaching assistant at Uoc Mo Xanh (Blue Dream) School, which helps students with special needs to integrate socially, and Ngoi Sao Xanh (Blue Star) Kindergarten, both of which are based in Da Nang.

He is making the most of his six months at both schools before returning to the University College of North Denmark to complete his studies.

Despite being unable to speak a word of Vietnamese, the young man, sporting a bushy beard, has quickly become the focus of children’s attention.

They jump at any opportunity to sit in his lap and burn themselves out playing his mesmerizing games.

As the heavy-set young man sweats profusely during his classes, he says that he does not mind losing some of his facial hair during his ‘work and play’ classes.

In one recent class, Hansen taught his preschoolers how to identify different kinds of fruit.

The children beamed with excitement as their teacher walked around the class with a basket loaded with pieces of watermelon, grapes and apples.

Hansen articulated all the words before awarding the fruits to those who pronounced them correctly.

He then showed them how to peel and slice the fruits with plastic utensils, with the assistance of their Vietnamese teacher.

Hansen gave encouraging applause and praise to those students who performed well.

Before arriving in Da Nang, Hansen had traveled to several countries while learning about the kindergarten education system in his own country.

Danish high school graduates spend at least six months experiencing the profession of their choice before actually pursuing it at university.

“This helps students get an idea of what their chosen profession is about and if they are cut out for the job. Fewer students drop out or change their major halfway through as a result, which prevents the government from wasting money,” Hansen explained.

The young man has come to a few honest conclusions regarding Vietnamese children based on his observation and trainee teaching experience in Vietnam.

“Vietnamese children are overly protected and pampered. Their parents do everything for them without showing them how to get what they want themselves,” he said.

“This is not necessarily in the best interests of the children. Deprived of opportunities to practice independence, the children will fail to strive for their dreams in adulthood,” he added.

The trainee teacher also pointed to the difference in children’s traveling experiences in Asian and Western countries.

Asian parents tend to take care of their children’s luggage when they travel.

By contrast, Western couples will generally buy their five-year-old a piece of luggage for them to drag along.

If the child runs into problems with the suitcase, the parents will wait and encourage the kid to fix the problem on his/her own rather than rushing to help.

Hansen revealed he had worked at centers that offer care for children aged from a few months to three years old.

With his considerable experience working with autistic children and those with special needs, Hansen has shown a keen interest in behavioral and psychological intervention.

At Uoc Mo Xanh, Hansen made it a point for the children there to engage in movement games as part of a physically taxing pedagogical approach.

“A teacher is supposed to correct each of the autistic child’s movements and spend considerable time in the emotional intervention and movement awareness process. I really want to be with mentally challenged children in order to help them,” he said.

“I think anyone is cut out for a kindergarten teaching job, as long as they adore children and are physically robust enough to play with them,”

Do Thi An Khue, principal of Ngoi Sao Xanh Kindergarten, observed that the Dane not only bolsters his students’ confidence but also helps the other teachers improve their English.

“Hansen has breathed new life into our school. He has excellent body language and maintains great eye contact in order to get himself across to the children,” Khue noted.