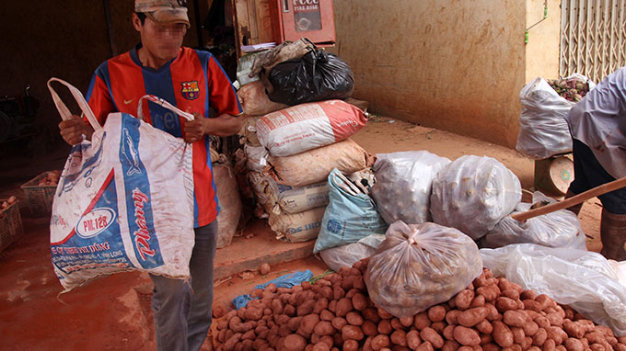 The rainy season, when Da Lat potato prices surge as supply falls behind demand, is also the peak time for dishonest wholesalers to re-brand Chinese potatoes into Da Lat-grown delicacies.

Fresh potatoes are one of the specialties that earn Da Lat, the capital of Lam Dong Province, its moniker of Vietnam’s vegetable kingdom.

However, not all Da Lat potatoes are actually grown in the Central Highlands hub.

The Da Lat wholesale market has become a mecca for the llegal practice of ‘washing’ away the origin of potatoes imported from China.

The Da Lat wholesale market consists of three rows of booths, two of which belong to potato wholesalers.

Approximately three large trucks can always be found parked outside the market, ready to unload Chinese potatoes to wholesalers who buy them for their fraudulent business.

The Chinese potatoes, covered in muddy black soil, are first washed to remove the dirt.

Wholesalers have machines capable of washing a few hundred kilograms in five minutes.

The dark yellow skin of the washed Chinese potatoes will be exposed, markedly different from the red or light yellow skin of genuine Da Lat potatoes.

This is when the most blatant stage of the fraud begins: wholesalers will coat the Chinese potatoes with the red dirt typical of Vietnam’s Central Highlands and wait until the plants become dry and the dirt sticks to their skin before storing them into plastic bags.

Some even take an additional step: putting some red dirt inside the bags before sealing them.

Trang, who runs one of the largest potato stalls at the market, said the ‘dirt coating’ phase should be done with great care to ensure that “the dirt stays on the potato skin during transportation.”

“The potatoes must remain wet, while the dirt must be completely dry during the mixing process,” she added.

Wholesalers do not even seem to think the practice of coating the Chinese potatoes with red dirt is something that should be done secretly.

Bags of red dirt are openly placed on several potato booths and some even dry the dirt on the street, with no pretense of hiding anything.

Van, another potato wholesaler, said they were forced to source Chinese produce and perform the ‘coating' trick to meet the demand of smaller markets.

“If I don’t do this, there are others who will,” she said.

Nguyen Xuan Ky, a member of the Da Lat produce wholesale market, said the potatoes are legally imported from China with proper papers and receipts.

“Even after being coated with the red dirt, the potatoes will leave the market with papers claiming they are Chinese potatoes,” Ky said, implying that the produce is only put on sale under misleading labels by smaller markets and traders.

Lai The Hung, head of the province’s plant protection department, said that while coating Chinese potatoes with red dirt to dupe consumers into thinking they are from Da Lat is the same as producing counterfeit products, there is no official rule to punish the dishonest wholesalers.

“Wholesalers who properly declare that their potatoes are of Chinese origin in all the relevant papers say that the dirt coating is to help preserve the plants during transportation,” Hung said.

Hung said authorities can only impose a fine if one is caught selling the Chinese products as the Da Lat potatoes, but proof in the form of labels or receipts must be obtained.

“Unfortunately this is something out of the authority of Lam Dong as the potatoes are only sold to consumers outside of Da Lat,” he admitted.

Huynh Ngoc Hai, director of the Lam Dong trade department, said that more than 7,000 metric tons of Chinese potatoes are transported to Da Lat, via both official and cross-border imports, on an annual basis.

“Da Lat wholesalers do not deceive traders in smaller markets about the origin of the potatoes, but they are indirectly duping consumers, who may be tricked into buying Chinese potatoes labeled as Da Lat-grown ones,” he said.

The journal is published every three months starting Q4 2017