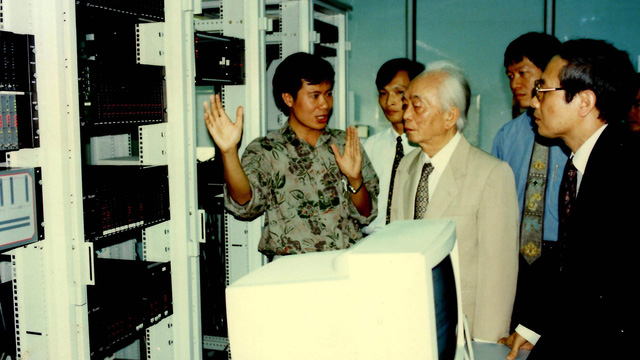 Dr. Mai Liem Truc, head of the National Administration of Posts (now the Vietnam Posts and Telecommunications Group), often tells stories of an era when he and his associates, all craving access to the Internet, were forced to “resort to all lines of reasoning to persuade each other and their superiors to reach a consensus.”

Vu Hoang Lien, chairman of the Vietnam Internet Association and former director of Vietnam Data Communication Co. (VDC), revealed that VDC was expected to give demonstrations to State and Party leaders and officials from competent agencies on what the global computer network was all about in order to push them towards acceptance of the new technology.

“We should have given online demos, but our technicians would download the programs and run them on an offline server instead to ensure that nothing went wrong,” he said.

The delegates were as impressed by the fast, smooth running Internet as they were of the bulky equipment.

After Tran Ba Thai, one of the pioneers credited with introducing the Internet to Vietnam, and his associates from the Institute of Information Technology, successfully tested the country’s first-ever email system in 1993, VDC was able to launch a data transmission system in 1995.

Lien further revealed that VDC launched its first project, worth VND7 billion (US$ 304,150 with today’s foreign exchange rate), to provide Internet services in 1996.

In early 1997, when the Internet hadn’t yet been made publicly accessible in the Southeast Asian country, VDC began providing internet services for the Committee on Overseas Vietnamese.

Que Huong’s approach to internet publishing remained simple.  After articles were translated into English, they were copied onto floppy disks and published online by VDC.  Nowadays, articles are published directly.

“The emotional moment that we first saw the magazine content online was imprinted in our minds,” Lien shared.

He added one of the most convincing lines of reasoning was the firm’s assurance of security and safety.

The word ‘firewall,’ which was repeatedly employed to reassure the officials, worked in their favor.

“Society was curious and expectant before the internet was officially unveiled in Vietnam. Que Huong Magazine going online almost one year prior to the official launch proved a persuasive push to the Party and State,” Lien noted.

The tremendous efforts in persuasion and demonstration paid off. Dr. Truc, head of the then National Administration of Posts and his associates were finally granted a permit to establish the National Internet Coordinating/Steering Board in Vietnam to prepare for the official launch of the global computer network in November 1997.

Earlier, in April 1997, the Government issued Decree No. 21/CP, which was a temporary order on the management of the Internet.

The core principle was “services are launched to the extent that they are controllable,” Dr. Truc further recalled.

The National Internet Steering Board, comprised of representatives from the National Administration of Posts, the Ministry of Public Security, and the Vietnam Science Institute, did their utmost to speed up the Internet launch in Vietnam, with their efforts including compiling regulations and inter-ministry guiding documents, issuing service rates, and providing Internet Service Providers (ISP) applying for permits with instructions on how to check international connection portals and firewalls.

The last-minute concern from the Politburo Standing Committee of the Communist Party of Vietnam was whether they could filter out and block all the damaging information currently rampant on the web.

“The Internet is instrumental to international trade and will help lure foreign investment in the current era of international integration,” Dr. Truc told the officials.

“The web will also considerably augment the amount of information available on the by disseminating it around the world and to overseas Vietnamese settling in North America and Western Europe,” he added.

Dr. Truc noted they he had been under the mounting pressure to turn international integration into a key advantage of introducing the internet to Vietnam.

Following Vietnam’s entry into the Association of Southeast Asian Nations (ASEAN) in 1995, the bloc raised the issue of electronic access.

“A lack of Internet access would certainly hinder Vietnam from being part of the playground,” Dr. Truc remembered arguing.

The pundit, Nguyen Khanh Toan, then-Deputy Minister of Public Securit, and Chu Hao, Deputy Minister of Science and Technology, later reported their progress at a meeting with the Politburo Standing Committee of the Communist Party of Vietnam.

Upon getting the nod from Politburo Standing Committee, Dr. Truc and his group moved on to persuade the government leaders.

They were presented to the then Prime Minister Phan Van Khai at his own home.

After a few hours of information exchange, the premier gave Dr. Truc a tap on the shoulder, urging that the launch had to be implemented properly and a shutdown must be avoided once the Internet was in place.

Dr. Truc and his contemporaries could not fully visualize the power of the Internet, which has brought tremendous success to the country.

“What we could envisage was that the connection would open to the door to economic growth, facilitate scientific research, and broaden people’s knowledge,” he admitted.

The intelligentsia, particularly researchers at universities and institutes and enterprises would be the first to benefit most from ready, limitless access to information.

“The key to our success in convincing the country leaders was in the trust we created that connecting Vietnam to the global grid was a worthy cause. Those behind that cause are trustworthy and  work unconditionally for the people’s and country’s sake,” Dr. Truc underlined.