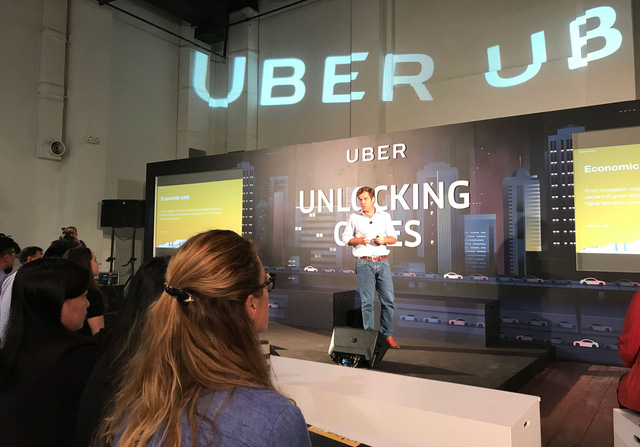 Uber is keen to find a way to cooperate with Vietnamese taxi companies, instead of eliminating them from the market or going against their traditional business model, an Asia-Pacific executive of the ride-hailing app has said.

Uber is facing strong protests from conventional taxicabs, who say the California-based transportation technology company is stealing passengers from them, in Vietnam.

Local taxi operators in Hanoi and Ho Chi Minh City have repeatedly called on authorities to either ban Uber and a similar ride-hailing app – Grab – from operating, or at last subject them to the same tax policies and regulations as conventional taxi companies.

However, Brooks Entwistle, chief business officer for Asia-Pacific with Uber, has underlined that cooperating with Vietnamese taxi firms is an important part of the company’s development strategy.

Speaking to Tuoi Tre (Youth) newspaper on the sidelines of a media meeting in Singapore on Tuesday, Entwistle said Vietnam is an important and potential market for Uber in the region and the company wants to cooperate with conventional local taxicabs for all parties to achieve mutual growth.

The Uber executive added that he is scheduled to visit Hanoi next week to meet with local regulatory bodies with regard to the app’s operations in the Southeast Asian country.

The upcoming cooperation is aimed at reducing the number of no-passenger cars traveling on the streets and easing traffic congestion, Entwistle said.

He emphasized that Uber wants to work together with Vietnamese taxi firms to achieve business growth, instead of going against them.

Last month Uber inked agreements with three major taxi firms in Taipei, allowing cab drivers in the Taiwanese city to use its app, a move which Entwistle said would be applied widely across Southeast Asian cities in the coming time.

Tuesday’s meeting was jointly held by Uber and The Boston Consulting Group (BCG), where the latter released its findings on the ride-sharing trend in major cities across Asia.

According to the survey, 81 percent of the respondents in Ho Chi Minh City and 79 percent in Hanoi want to buy a car in the next five years. The two Vietnamese cities also have the worst traffic jams, in terms of time wasted, among Southeast Asian metropolises.

For instance, during rush hours in Hanoi, it takes 70 minutes to complete a trip that normally takes only 30 minutes, meaning commuters have to spend 40 minutes on average in a traffic jam.

The survey also found that ride-hailing apps have helped lower the number of cars traveling on the streets by 92 percent in Bangkok, 91 percent in Kuala Lumpur and 88 percent in the Philippines.

While no new major roads have been opened in Hanoi over the last few years, apartment projects, collectively comprising several thousand apartments, have proliferated in the Vietnamese capital.