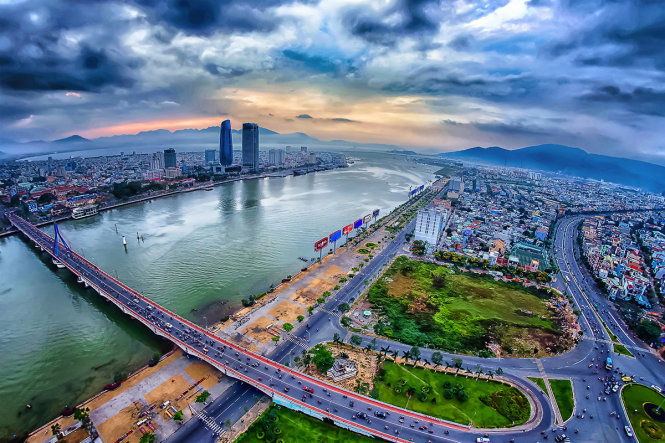 This scene unfolds in Da Nang, Vietnam, the capital of central Vietnam and the third largest urban area in the country after Ho Chi Minh City and Hanoi

Editor’s note: Rick Ellis was born and raised in Canada. Now completing his 39th year overseas, Rick has travelled to hundreds of destinations in over 60 countries and lived or spent extended time in nine countries, and has been a nomad in several Southeast Asian destinations for five years. Rick currently splits time between Malaysian Borneo, Bali, and Vietnam, and has also spent extended periods of time in the Philippines, Cambodia, Japan, and China. It’s no secret that Vietnam is Rick’s favourite destination over the last two years given the rich culture, energetic and friendly people, and the best food anywhere. He splits time between Da Nang and Da Lat during his visits with more destinations to be added soon.

Lovers stroll along the riverside promenade, a few chess games are underway, and several couples spin and twirl to a tango broadcast over the loudspeakers.

The backdrop features a breathtaking cable-stayed bridge to the north and another in a unique form of a dragon to the south. Across the river, tall buildings and hotels are tastefully decorated to complete the gorgeous scene.

This could easily be a scenario on the Seine River in Paris with the famous “bateaux mouches” evening cruises, but it’s not Paris, or France – it’s not even Europe.

This scene unfolds in Da Nang, Vietnam, the capital of central Vietnam and the third largest urban area in the country after Ho Chi Minh City and Hanoi.

Da Nang has been on the international map for five centuries – at one time an important trading center for Portuguese, Chinese, French, American, and other nationalities along with its neighbour to the south, Hoi An.

The city was known as Tourane when Vietnam was part of French Indochina and it changed hands between the French and Vietnamese several times during conflicts until the Vietnamese triumphed in the late 1800s and named it Da Nang.

Da Nang was part of Quang Nam Province until the city was elevated to be one of five centrally controlled municipalities in Vietnam in the late 1990s, which increased focus on planning, budget allocation, and infrastructure in the city.

The result is a coastal city featuring My Khe Beach, considered by most to be one of the top beaches in Southeast Asia, stretching 30 kilometers from the famed Linh Ung Pagoda and the 67-meter-high Lady Buddha statue southward to Cua Dai Beach in Hoi An.

A broad boulevard runs adjacent to My Khe with a median so finely manicured that the grass is cut by hand, resembling a green on a golf course. Workers remove weeds on their hands and knees, no attention to detail is spared.

The city is home to 1 million inhabitants, yet retains a provincial, friendly, and laid-back feel to it unlike so many larger cities we’re used to. The electricity and traffic flow, the rains drain effectively during the wet season, the streets are wide, spacious, and well-designed with future growth in mind.

The city is so advanced that it sponsors free Wi-Fi coverage to most areas plus nearly all small businesses offer Wi-Fi to their customers so coverage both inside and outside is effective.

The Han River runs parallel to the coast for several kilometers before terminating into Da Nang Bay on the north side of the city. The river boasts 7 bridges spanning the Han River and its tributaries, the Cai and Cam Le rivers.

The Han represents the border between the coastal section and the central business district Hai Chau, home to numerous skyscrapers including the conical-shaped architectural marvel Da Nang Administration Center, the tallest building in central Vietnam at 36 stories.

Hai Chau is the commercial, dining, entertainment, and shopping hub of the city – a bustling district marked by the Han River Bridge on one horizon, the incomparable Dragon Bridge on the other, Son Tra and Ngu Han Son Districts near the beach to the east, and Cam Le District to the west.

The city is modern and well-conceived while retaining all its authentic charm and grace in one of the most beautiful settings anywhere. Old and new blend together to create a quaint atmosphere: old-style markets, unchanged in decades, are adjacent to modern skyscrapers. Pedicab “cyclo” taxis still ply the streets, a great way for tourists to soak up the sights and sounds.

Da Nang is situated in the middle of 3 UNESCO World Heritage Sites: Hue’s Imperial City and Citadel to the north, the stunning My Son Hindu ruins to the southeast, and Hoi An’s unforgettably romantic ancient town to the south.

And Da Nang is constantly on the move: the city recently published its master urban plan for the city covering the years 2030 to 2050, which is a public document available to all. Now that’s planning!

The Da Nang airport had a capacity of six million passengers per year but as of 2014 already hit five million passengers, so in 2015 a US$150 million airport expansion was kicked off and completed within 18 months.

Da Nang is among the leading destinations in Vietnam, having welcomed 1.66 million foreign tourists in 2016, representing a 32 percent year-on-year surge. The city forecasts over 2.2 million in total international tourist arrivals in 2017, making up an increase of 35 percent over 2016.

Things have been even busier than usual over the past year in Da Nang because the city will host the APEC Economic Leaders’ Week (AELW) from November 6 to 11. The conference involves 10,000 delegates from the 21 APEC member countries.

Twenty-one projects designed to improve local streets and traffic flow were identified, planned, and completed in recent months, as well as the opening of the aforementioned new international terminal at Da Nang Airport.

The main venues for the event include The Intercontinental Da Nang, the Ariyana Convention and Exhibition Center, the Furama Resort, Sheraton Hotel, and the Tien Son Sports Arena, the beautifully renovated site of the conference’s gala dinner.

Planning and preparation include the Department of Tourism working with 600 hotel managers on security, hygiene, first aid training, and fire prevention at the 18 hotels and resorts involved in the conference.

Everyone has jumped on board to prepare for the conference including all types of service providers including airport personnel, traffic control officers, and city taxi drivers. Taxi drivers are often the first local people that international tourists interact with and therefore among the most important.

Often that first impression is indelible so it must reflect a professional and courteous experience. And that’s where Hoang comes in. Hoang hasn’t needed any coaxing, in fact he’s been ready for this conference since long before it was ever heard of.

Hoang is a public relations officer for a major taxi company stationed along the riverside promenade Bach Dang each day, working to understand tourist needs, helping to choose destinations and routes, providing directions to pedestrians, and translating for drivers to make sure everything is crystal clear.

I never take his company’s taxis because I prefer to walk, and Hoang knows it but doesn’t care. Rather, he greets me every time I pass with a big smile and a handshake. To him, everyone is a customer.

Hoang’s job generates no direct revenue but he’s a very valuable resource to his company, making the difference between an unpleasant and memorable experience.

For Hoang and thousands like him in similar service provider roles in Da Nang, the AELW means a lot of preparation and responsibility, it’s an event that will put Da Nang on the world map.

What stands out to me as I chat with Hoang is his excitement and energy. Nobody needs to explain the importance of this coming week or motivate Hoang and his teammates – it’s not a duty or an obligation to fulfill.

To them this represents a huge opportunity to make a difference and move things forward, a frame of mind and an attitude that permeate from top to bottom in a country that’s going places in a hurry.