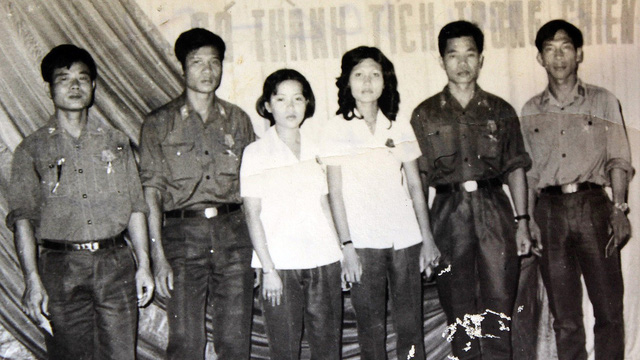 Crew members aboard a Vietnamese flight courageously resisted skyjackers during a 52-minute hijacking attempt in 1978.

Thirty-nine years have elapsed, but Ngo Kim Thanh, a former flight attendant on a propeller-driven DC4 plane remembers every detail of when her plane was skyjacked on June 28, 1978.

“I’ve been gripped by the experience for my entire life,” says Thanh, who now resides in District 6, Ho Chi Minh City with four bullets still lodged in her body as a stark reminder of the attack.

In the hail of bullets and grenades which descended on her flight, the pilots, air stewardesses, and guards led a courageous resistance against the hijackersfor 52 seemingly endless minutes.

Gun fight and battle of wits

Thanh and Huynh Thu Cuc were working as stewardesses aboard the flight.

Just fifteen minutes into the flight, hijackers began their attempt to take control of the plane as it cruised 2,700m above Quang Ngai Province in the central region.

“Thanh and I were preparing food for the passengers when the curtain between the passenger compartment and the air hostess area was suddenly pulled apart.

The two women immediately found themselves face-to-face with an aggressive, knife-wielding thug.

Cuc knew instantly the jet had been hijacked but bravely asked the man to allow here to walk down the aisle and reassure passengers that everything was okay.

“If the passengers panic, the plane will lose balance and we might crash,” she told the hijacker.

Thanh was stopped by the attacker near the cockpit door.

Soon after, another hijacker smashed a statue and revealed a grenade hidden inside.  The man removed the pin and began to threaten the passengers.

By the time Cuc reached the second row of seats, another man stopper her and shoved her into the middle chamber, but not before the quick-minded woman was able to hit the plane’s alarm button to alert the cockpit crew members.

A midair guard named Hue was able to unholster his gun and take aim the grenade-wielding hijacker, but held his fire out of fear the hijacker would detonate the grenade and bring the plane crashing down.

Hue’s hesitation gave a different hijacker the opportunity to hit him on the neck and take his K54 pistol.

The gunman held Thanh, one of the two stewardesses, at gunpoint, coercing her to ask the cockpit crew to open the door.  Their plan?  Enter the cockpit and intimidate the pilots into diverting the plane to another country’s airspace.

Thanh adamantly refused to knock on the cockpit door.

“I thought if they gained entry into the control cockpit they would kill all the crew members,” Thanh explained.

About five minutes later the hijacker became fed up with Thanh’s defiance and shot her four times in the thigh before banging on the door himself.

Upon hearing the commotion outside, flight engineer Sam peeped through a small hole in the door and saw a ferocious-looking man on the other side.

Three of the cockpit crew were tasked with reinforcing the cockpit door with their bodies and anything else available.  Meanwhile, the captain notified Da Nang Airport authorities of the hijack and sought permission to return to the aerodrome.

“Sam, Nhung and I tried to stand our ground using the metal bars installed on the plane to stabilize goods,” Huong recalled.

Huong was no stranger to hijackings.  His best friend and classmate, Nguyen Dac Hoa, was killed by hijackers on October 29, 1977 during the country’s first skyjacking after 1975, featured in Part 1 of this series.

“The door was made of wood instead of iron like today and didn’t have a lock. The door shook violently and the screws became loose,” the man, now a pilot for low-cost carrier VietJet Air, recalled.

Realizing the jet was making its way back to Da Nang, the gunmen shot Cuc in the leg for refusing to convince the crew to open the door.  The terrified woman fell to her knees in the aisle, feigning unconsciousness to avoid being forced into helping the hijackers.

With few choices of people left to coerce, the gang turned to midair guard Hue.  The guard refused to give in and was stabbed six to seven times during his fight with the attackers.

Desperate, the thugs fired wildly at the cockpit door.

Sam was hit with a bullet in his chest and another in his arm.

Following the 1977 skyjack, each crew member was issued a K54 or K59 pistol.  Unfortunately, Huong was the only crew member to bring his gun to work that day.

“I fired back three times and there was silence. I didn’t know the bullets hit the gunman in the leg until later. I was shot twice in the chest and leg,” he recounted.

Only Captain Nam remained unhurt at that point.

As the jet began its descent towards Da Nang’s airport, one of the hijackers threw the grenade at the cockpit door.

“The grenade somehow bounced right back at the hijacker and exploded. He was killed instantly,” stewardess Thanh recalled.

Unfortunately, the crew was not left unscathed by the grenade.  Thanh wound up with debris in her leg while flight engineer Nhung suffered severe torso injuries.

“The plane was rocking vehemently while panicked passengers screamed,” Thanh recounted with a shudder.

The explosion also left a hole the size of a table in the jet’s floor.

Knowing they would be apprehended upon landing, the hijackers desperately fired at the engines and fuel tank in an attempt to kill everyone on board.

Fortunately, strong gusts pushed the bullets away from the plane’s crucial equipment.

A panicked jet seizer blew out the passenger exit door with the gunshots, through which two of them jumped.

By sheer luck, the cable operating the wheel shaft was only partially broken.