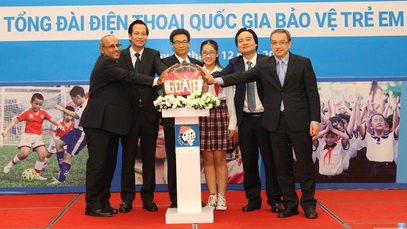 Vietnam on Wednesday launched a new national hotline for child protection at 111, which citizens are encouraged to reach for reports of child abuse, harassment and other forms of violence against children.

The three digits were chosen for their memorable pattern compared to the old hotline number of 1800 1567.

Vietnamese Deputy Prime Minister Vu Duc Dam was among the government leaders to attend the hotline’s launch ceremony in Hanoi, organized by the Ministry of Labor, War Invalids and Social Affairs (MOLISA) in cooperation with the Government Office.

MOLISA Minister Dao Ngoc Dung was appointed vice chair of the committee, which oversees the running of the child protection hotline.

Speaking at the ceremony, Minister Dung said the brief and memorable hotline would ensure that it is known to as many people as possible and becomes a go-to number for people who wish to make reports of child abuse, harassment and violence.

Reports of all kinds are welcomed, whether they are made by individuals, organizations or educational institutions, Dung underlined.

Three call centers in Hanoi, Da Nang and An Giang Province are in charge of handling calls from the northern, central and southern regions of Vietnam, respectively.

The hotline is toll-free and available 24/7, including holidays, to guarantee uninterrupted support of children in an emergency.

The old hotline of 1800 1567 will be kept temporarily active until the public becomes familiar with the new number and no more calls are made to the old one, according to a counseling official from MOLISA.

Since the establishment of the national child protection hotline in 2004, over 2.5 million calls have been received by operators, at an average rate of 240,000 calls per year, according to the official.

The new hotline is on stream amidst repeated reports of violence against children in Vietnam in recent weeks, including the brutal beatings of kids at a household-run daycare center in Ho Chi Minh City and the alleged torture of a seven-year-old with heated iron by her own father.

Just last month, a 65-year-old woman in northern Vietnam became the prime suspect in the death of her weeks-old grandson, whom she allegedly killed over superstition.

Earlier, a court in the southern beach city of Vung Tau sentenced a 77-year-old man to three years in prison for molesting two preteen girls aged six and 11.