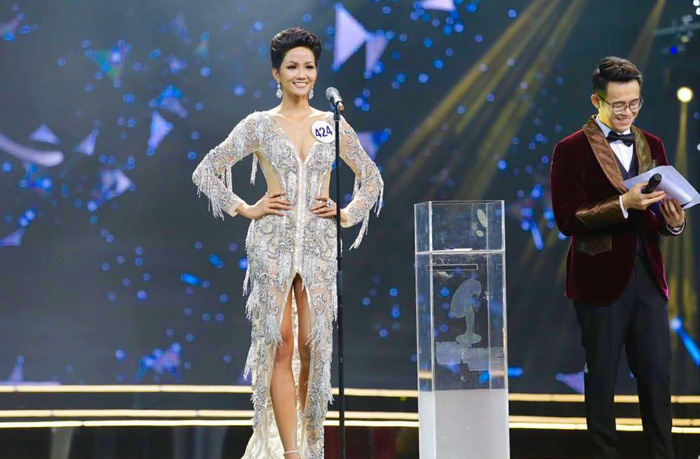 A reporter of a Hanoi-based newspaper has officially apologized to the 2017 Miss Universe Vietnam for making what was widely criticized as a rude, racist and sexist comment about the beauty, shortly after she won the crownlast weekend.

Dao Tuan, who works for Lao Dong (Labor) newspaper, has had his Facebook account blocked, apparently after being reported by a number of other users, after his offensive post about the newly-crowned beauty queen H’Hen Nie on Sunday.

The reporter therefore sent his official apology through some local newspapers, saying he had also filed a report of the incident to the Ministry of Information and Communications as requested.

The Lao Dong reporter mocked Nie’s name, which is different from the popular Vietnamese names of the majority Kinh people, and compared her brown skin to the color of the scrotal sac, a part of the external male genitalia.

Tuan also asserted that the beauty queen could “go straight into the woods and start howling” even if she “does not have a tail.”

Dao Tuan later edited his Facebook post, only to add a ‘postscript’ that Nie deserved to receive any comments about her, reasoning that “by entering the stage and wearing the crown, it goes beyond question that she should accept all judgments from the public.”

Vietnam currently has 54 ethnic groups, some of whom live in mountainous or distant areas.

Tuan’s comment on Nie, who defied all disadvantages as a woman of an ethnic minority to finish college and become a recognized model, earned him a groundswell of criticism, especially as he works for a major newspaper.

As in several other Asian countries, it is a wide misconception in Vietnam that white skin means beauty.

The Miss Universe Vietnam organizers have been praised for their decision to award the crown to Nie, and the first and second runners-up as they all have an ‘unusual’ beauty that goes against the standard of white skin and long hair.

On Monday, the information ministry tasked the Press Regulatory Department with ordering Lao Dong to ask its employee to make a report on his controversial Facebook post that insults and humiliates the new Miss Universe Vietnam.

Less than 24 hours after the ministry stepped in, Tuan delivered his official apology to Nie, saying he had “made an offensive and humiliating Facebook post about H'hen Nie, using words that should never be accepted.”

“Even when my Facebook account was blocked, I find it necessary to extend my apologies to H'hen Nie and everyone for my ugly words,” he said in the apology sent to the media.

Tuan said he had already submitted his report to the ministry and is now waiting for being slapped with a disciplinary action or punishment.

“This is the price I have to pay for my words and statements which a reporter and a media person should refrain from making,” he admitted.