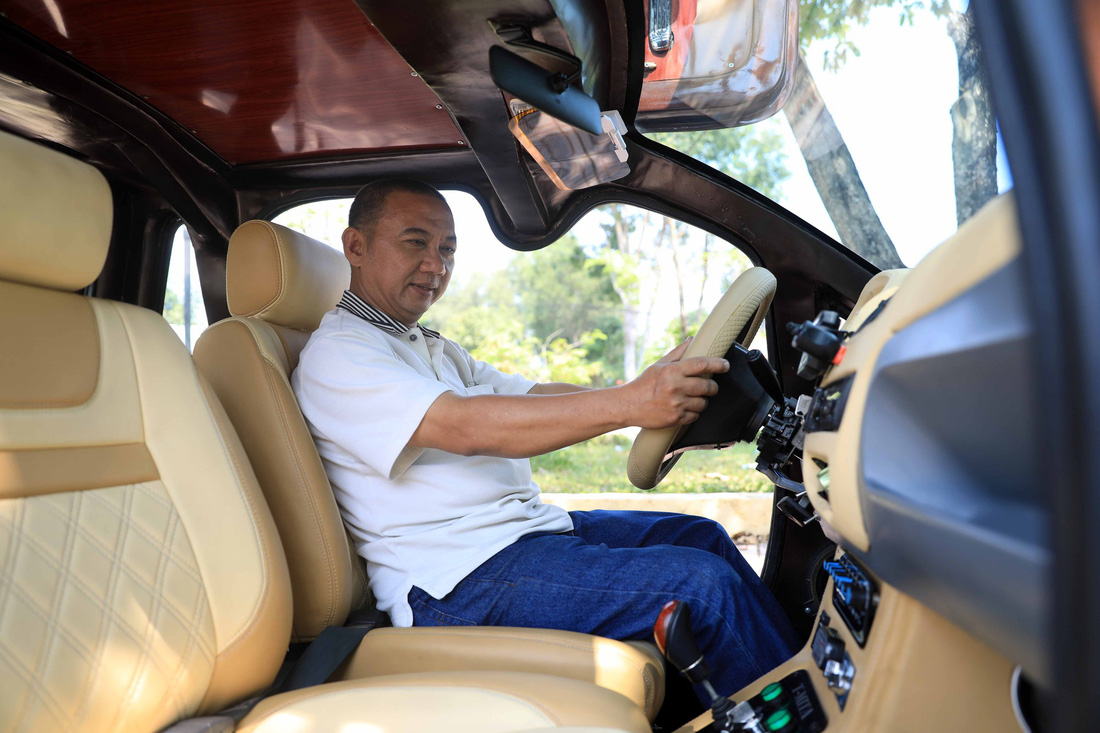 A Ho Chi Minh City resident has become famous after introducing his homemade electric car that can carry up to five people at the maximum speed of 50km per hour.

Tran Minh Tam, owner of an electric bicycle shop in Cu Chi District, has been able to create the electric vehicle without using any high technology.

Local residents have given the man the nickname ‘Tam xe dien’ (electric car Tam) for his accomplishment.

The car, named CITY 18, is designed to have five seats and can reach the top velocity of 50km an hour.

After being fully charged, the vehicle can travel for up to 160 kilometers.

It is also equipped with an air conditioner and karaoke system using Bluetooth, both of which are powered by an engine separate from the car’s.

Tam has developed a passion for automobiles for quite a long time as his family owned a fleet of passenger buses in the 1980s.

Despite dropping out of school after the ninth grade, Tam has equipped himself with a lot of knowledge on cars after years of working as a driver.

After running his own electric bicycle business, he began feeding his enthusiasm by building electric vehicles, from two wheels to three and four wheels.

Tam also turned his bike shop into his personal gallery with a series of photos of the electric vehicles he had made over the decade.

In 2007, Tam’s three-wheeled car, which had three seats and ran on batteries, was honored with the third prize at an innovation contest organized by the Ho Chi Minh City Union of Science and Technology Associations.

“With the help of a friend, I applied for a permit for the mass production of my three-wheeled car,” Tam said. “However, no competent agency approved my request.”

The vehicle has sit in Tam’s back yard ever since.

Despite the failed attempt, Tam continued making modified vehicles upon his customers' orders.

“These vehicles are designed to meet personal needs, thus do not require a formal permit. I mainly do it out of passion,” Tam elaborated.

He came up with the idea of creating an electric car in 2015, after watching a news story about foreign countries’ efforts to develop eco-friendly electric vehicles.

“I found out that no one in Vietnam had been able to make an electric car. If people in other countries can do it, I can,” Tam asserted.

With zero knowledge of how to build a car, the first thing Tam did was imagine one.

“I started buying some car seats and placed them in my living room, before determining the positions of the wheels and calculating the length, width, and height of the car,” Tam said.

The vehicle utilized the power engine of electric bicycles, and what Tam had to do was create a transmission and steering system.

He drew the chassis on paper and let welding professionals do the rest. The same method was applied to the car windows.

Tam also hired an engineer to make an electronic board based on his requirements.

The doors are folded and move upwards when open thanks to a hydraulic system, which is convenient in smaller space.

After completing the prototype, Tam picked some less crowded streets near his house to carry out test runs.

“The expenditure was high as there was little to no modern technology, while I also had to fix a lot of errors and redo many details,” Tam elaborated.

He has registered for the protection of industrial design for his electric car.

As the automobile is built to feed his passion, Tam has no intention to make it commercial.

“However, if a business wishes to mass-produce the CITY 18, I am willing to cooperate,” the man stated.

He expected that his product would only sell for VND250 million ($11,027) if an investor agrees to provide a factory and production line.

Tam intends to design a new version of his electric car, which will reach the maximum speed of 120km per hour and travel for up to 300 kilometers if fully charged.

The vehicle is also expected to run perfectly on flooded streets.

The naval forces of Vietnam and the Philippines that are respectively stationed on Song Tu Tay (Southwest Cay) and Song Tu Dong (Northeast Cay) Islands, parts of the Truong Sa (Spratly) archipelago, joined in their first-ever naval personnel interaction on Sunday