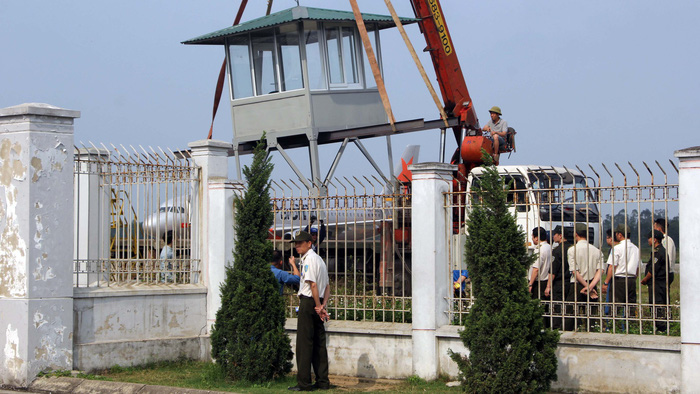 Security and flight safety have been compromised in many airports across Vietnam due to poor construction of perimeter fencing systems and loose security.

Security fences around multiple airdromes are not secure enough to prevent both accidental and intentional break-ins, while lax security steps and improper surveillance camera systems at some facilities exacerbate the problem.

Earlier this week, a mental patient managed to climb the fence into Vinh International Airport, located in the namesake city in the north-central province of Nghe An, before getting onto an aircraft without anyone’s notice.

The flight attendants only figured out the situation after the man failed to present his boarding pass.

Following the incident, five airport employees were fined for their carelessness, whereas the airdrome itself was also slapped with a VND40 million (US$ 1,756) pecuniary penalty.

Dinh Viet Thang, head of the Civil Aviation Authority of Vietnam (CAAV), told Tuoi Tre (Youth) newspaper that the employees in charge of aviation security and airline procedures had not fulfilled their duties regarding the supervision and inspection of the airfield.

A probe also showed that the surveillance camera system does not cover all areas at the airport, while several sections of the perimeter fences can also be easily compromised by trespassers, Thang continued.

Hoang Van Thu, director of the Vinh airport, stated that the facility management is planning to add barbed wires to the fences around the airport.

A new security post has also been constructed, while around-the-clock supervision will be in place.

In October 2017, flights at Cam Ranh International Airport were delayed for 20 minutes after a dog ran onto the runways.

In 2012, operations at Phu Bai Airport in the central province of Thua Thien-Hue were ceased for a day and 60 people were mobilized to catch a gaur that had entered the facility.

In another case, a drunk man managed to trespass on an airport in Buon Ma Thuot City in the Central Highlands during a night in 2011. He then took a nap on one of the aircraft.

Thang, director of the CAAV, stated that the agency will review the quality of all perimeter fencing systems of airports across the country.

Reinforcement will be carried out if necessary, he added.

The CAAV will also task the Airports Corporation of Vietnam (ACV) with assessing security systems, infrastructure, and procedures at local airdromes.

Sudden examinations will be conducted to make sure that the facilities comply with regulations on aviation safety.

According to Do Tat Binh, deputy general director of the ACV, more cameras will be added to the CCTV systems of all airports.

That many airdromes are located near residential areas is also a reason for the problem, Binh stated.

During an interview with Tuoi Tre, a representative of a local carrier considered that solving issues of airport security requires the responsibility of many sides including CCTV operators, aviation security employees, airline procedure officers, flight attendants, and cabin crews.