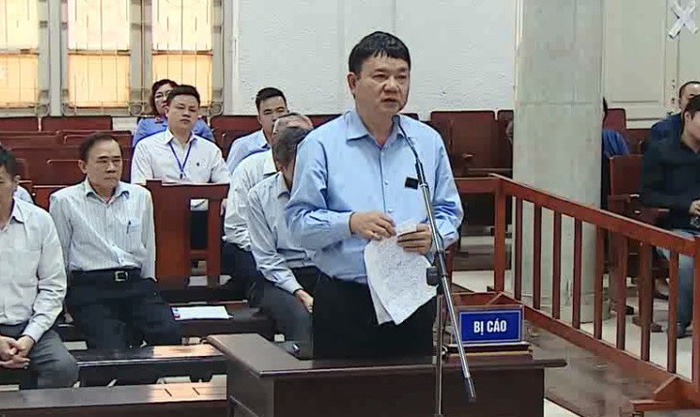 Dinh La Thang was found guilty of acting against state regulations on economic management in PetroVietnam’s loss of US$35.2 million worth of investment in OceanBank

A Hanoi court on Thursday handed an 18-year imprisonment sentence to a former Politburo member, who began standing his second trial last week for his involvement in a multimillion-dollar loss at a state-owned company where he was the top boss.

Dinh La Thang, ex-chairman of PetroVietnam (PVN), was found guilty of acting against state regulations on economic management in the loss of VND800 billion ($35.2 million) worth of investment the state-run oil and gas group put in local lender OceanBank, the court ruled.

As his wrongdoings resulted in serious consequences, Thang was sentenced to 18 years behind bars and required to compensate VND600 billion ($26.43 million) out of the total loss to OceanBank.

Six other defendants were responsible to repaying the lender the remaining VND200 billion ($8.81 million). Thang was chairman of PVN’s management board for the 2008-11 tenure.

Thursday’s court ruled that Thang had deliberately violated state regulations on economic management when he spearheaded a plan to channel PVN’s investment into OceanBank in 2008, when the credit institution was considered to be poorly performing.

Thang did not discuss with the board when he signed a contract with ex-OceanBank chairman Ha Van Tham, after which the oil and gas group invested a total of VND800 billion in the bank. He did not submit a report to the central government regarding the deal as required by the law.

In 2015, the bank was acquired for zero dong by the State Bank of Vietnam, the country’s central bank, because of its poor financial results, which caused losses to the entire investment.

Six accomplices were convicted in the case for implementing the plan under the order and instruction of Thang, according to the court ruling.

Dinh La Thang was previously a member of the Politburo, the all-powerful body of the Communist Party of Vietnam, from January 27, 2016 to May 7, 2017.

Thang has already been sentenced to 13 years in prison for deliberately violating state regulations following the court ruling on January 22. He was involved in financial misconduct at PVN that resulted in separate losses of VND119 billion ($5.24 million).