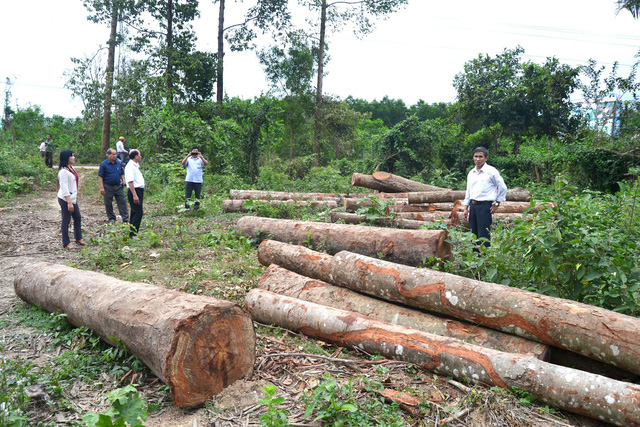 An allowed logging project to make use of trees felled down in a storm-hit area in south-central Vietnam last month has shown numerous abnormal signs, prompting police to look into the case.

Police in Tay Hoa District, Phu Yen Province decided to launch an investigation into the logging as the local forest management authority seems to dishonestly report the number of wood collected.

More than 100 cubic meters of wood is estimated to have been taken out of Tay Hoa protection forests, which were partially destroyed by strong winds during Typhoon Damreylast year, during the logging project, but less than a tenth of the amount was actually handed to authorities. Storm Damrey swept through south-central Vietnam in November, killing 106.

The logging in Tay Hoa lasted from March 10 to 13, during which workers hired by the forest managers harvested trees felled during the storm for wood collection.

Vietnamese laws allow the logging of trees damaged by natural causes, with those conducting the harvest required to submit a report in advance detailing how much wood they expect to get from the activity. The Tay Hoa protection forest managers did not submit any report before the harvest.

It was not until their activity came under inspection by a local forest protection unit did they submit a report, explaining that they had been “in a rush” after noticing locals illegally collecting the woods.

Le Van Be, chief of Phu Yen Forest Protection Department, estimates the number of trees logged to be up to 491, or around 115 cubic meters in volume.

At a press briefing on Friday, the administration of Tay Hoa District said the local police force had taken over the case and launched an investigation into the conspicuous logging.